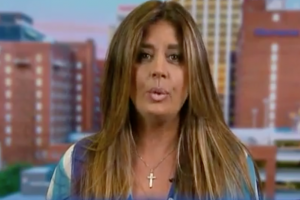 A former model who was featured at the center of a lengthy New York Times report that assailed Donald Trump’s treatment of women said Monday that her account was taken out of context, misquoted and “spun” by the Times in order to portray the Republican presidential candidate in a negative light.

“They spun it to where it appeared negative. I did not have a negative experience with Donald Trump,” Rowanne Brewer Lane told “Fox & Friends.”

Lane briefly dated Trump after the 1990 encounter described in the Times article. But the way she described their relationship and that encounter on Monday was much different than the way it was portrayed in the front-page weekend article that ran under the explosive headline, “Crossing the Line: How Donald Trump Behaved with Women in Private.”

The article opens by describing how Lane, then 26 years old, met Trump at a pool party at Mar-a-Lago, Trump’s Palm Beach, Fla., estate. According to the piece, Trump had barely met her “when he asked her to change out of her clothes.” He gave her a bikini, which she changed into. Lane is quoted as saying, “He brought me out to the pool and said, ‘That is a stunning Trump girl, isn’t it?’”

The Times goes on to describe the incident as “a debasing face-to-face encounter between Mr. Trump and a young woman he hardly knew.”

But Lane told Fox News that was not the case.

“He never made me feel like I was being demeaned in any way,” she said, calling the article “very upsetting.”

Lane said she did in fact meet Trump at that pool party, but said he had simply offered her a swimsuit – she said “okay,” since she hadn’t brought one.

As for Trump’s comment about her being “stunning,” she said, “I was actually flattered” by that, not demeaned. “That’s what I told the Times and they spun it completely differently.”

She described the now-presumptive GOP presidential nominee as a “gentleman” and said she planned to support him in the election.

The Times reporters, meanwhile, defended their story on Monday.

“I think readers of the story can digest what happened to her at Mar-a-Lago,” reporter Michael Barbaro said on CBS’ “This Morning.”

He said, “Recall in my interview with her … she basically expressed that ‘I was taken aback by this.’ And I think that’s how we depicted it.”

“We gathered a variety of voices. And our story is not just Rowanne’s account. It’s the experience of many women,” reporter Megan Twohey said on the same program. According to the article, the reporters interviewed dozens of women who had worked for, dated or interacted with Trump.

In a written statement, a New York Times spokesperson also said: “Ms. Brewer Lane was quoted fairly, accurately and at length. The story provides context for the reader including that the swimsuit scene was the ‘start of a whirlwind romance’ between Ms. Brewer Lane and Mr. Trump.”

Trump, though, took to Twitter to hammer the Times over the piece, following Lane’s comments on Fox News. Trump initially misspelled Lane’s first name as “Roseanne,” before correcting himself.