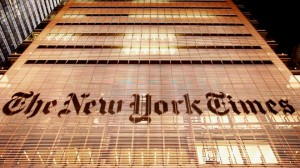 The New York Times editorial board, which twice endorsed President Obama and has championed many planks of his agenda, on Thursday turned on the president over the government’s mass collection of phone data — saying the administration has “lost all credibility.”

The grey lady’s editorial section lately has shown frustration with the administration’s civil liberties record. It has criticized the escalation of the lethal drone program, and it lashed out after the Justice Department acknowledged seizing reporters’ phone records last month.

The report that the National Security Agency has been collecting phone records from millions of Verizon subscribers appeared to be the last straw.

said the administration was using the “same platitude” it uses in every case of overreach — that “terrorists are a real menace and you should just trust us.”

The editorial continued: “Those reassurances have never been persuasive — whether on secret warrants to scoop up a news agency’s phone records or secret orders to kill an American suspected of terrorism — especially coming from a president who once promised transparency and accountability. The administration has now lost all credibility.”

The editorial board claimed Obama “is proving the truism that the executive will use any power it is given and very likely abuse it.”

of then-candidate Obama. At the time, the Times praised Obama’s “cool head and sound judgment,” and said he was “putting real flesh on his early promises of hope and change.”

Lawmakers on both sides of the aisle voiced concern on Thursday about the records collection effort. It was first reported by The Guardian newspaper, which obtained a copy of a secret court order allowing the government to collect phone call information – though not monitor the calls themselves — directly from Verizon. Civil liberties-conscious lawmakers like Sen. Mark Udall, D-Colo., and Sen. Rand Paul, R-Ky., cried foul, as did the American Civil Liberties Union.

Lawmakers in the loop on the program tried to assuage concerns, however. Sen. Dianne Feinstein, D-Calif., and Sen. Saxby Chambliss, R-Ga., who lead the Senate intelligence committee, defended the program as necessary to keep the country safe.

“The order reprinted overnight does not allow the government to listen in on anyone’s telephone calls. The information acquired does not include the content of any communications or the name of any subscriber. It relates exclusively to call details, such as a telephone number or the length of a telephone call,” he said.

The Times editorial described this explanation as “lame” — “as though there would be the slightest difficulty in matching numbers to names.”

“Essentially, the administration is saying that without any individual suspicion of wrongdoing, the government is allowed to know who Americans are calling every time they make a phone call, for how long they talk and from where,” the Times editorial board wrote.

The Times editorial board has long opposed The Patriot Act, which was the legal basis for the records collection, and reiterated that opposition in light of the latest revelations.

But the law’s author, Rep. Jim Sensenbrenner, R-Wis., said Thursday that this application of the law was “never the intent.”