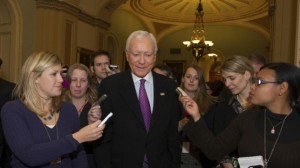 Senate Republicans say the Labor Department appears to be spending millions in taxpayer dollars to establish labor unions and promote collective bargaining in foreign countries and is asking top Obama administration officials for a full audit.

“At a time when our federal budget is deteriorating rapidly … it is troubling to us that the department appears to be spending millions of dollars of taxpayer funds to establish labor unions and promote collective bargaining in foreign countries,” they said in a letter to acting Labor Secretary Seth Harris.

The purported activities were conducted by the agency’s Bureau of International Labor Affairs.

The bureau for the past several years has purportedly made numerous awards — worth millions of dollars — to the United Nations, the Solidarity Center and other similar groups, “whose stated objective is to help establish labor unions in foreign countries,” the senators said.

They also said the bureau recently awarded a Colombian labor organization $1.5 million to help workers improve their collective bargaining rights and $2.2 million to the Solidarity Center, an AFL-CIO organization, to strengthen unions in Haiti and Peru.

In addition, the bureau purportedly awarded a $1.5 million grant to an international development company in 2011 to assist labor unions in Vietnam engage in collective bargaining, the lawmakers said.

The letter was also sent to Government Accountability Office Comptroller General Gene Dodaro. The BILA did not return a request Saturday for a response.

The bureau’s stated mission is to “help ensure that workers around the world are treated fairly and are able to share in the benefits of the global economy.”

The agency also states it focuses on protecting workers’ ability to exercise their rights and addressing the workplace exploitation of children and other vulnerable populations.