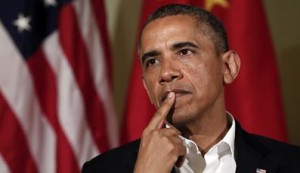 The Obama administration has taken a first step toward opening a criminal investigation into the purported leaking of classified documents related to the federal government tracking Americans’ phone calls and emails, a source familiar with the high-level discussions told Fox News on Saturday.The source said a “criminal report has been filed,” which begins the process.

The FBI and Justice Department would likely be involved in such a probe, which is expected to focus on British and U.S. newspapers including The Guardian. The British newspaper reported late Wednesday that the U.S. government had collected the phone records of millions of Verizon customers.

On Saturday, White House spokesman Ben Rhodes said the president is reviewing the situation to see what kind of damage might have been done.

“We’re still in early stages,” he said. However, Rhodes acknowledge the Justice Department would have to be involved and that the agency will discuss the matter with intelligence officials in the coming days.

Such an investigation typically starts when an agency files a complaint about a security breach, but it remains unclear whether the secretive National Security Agency, which led in the data-tracking to thwart terrorism, is involved in the filing.

The story included information about an order — approved by the U.S. Foreign Intelligence Surveillance Court — requiring a subsidiary of Verizon Communications to give the NSA data showing phone calls made from within and outside the United States, according to Reuters.

On Thursday, the Guardian and The Washington Post published information about a top-secret NSA program called PRISM, which involved collecting email information from such Internet companies as Apple, Facebook and Google.

James Clapper, the director of U.S. national intelligence, has already condemned the leaks, saying the news stories about the emails had “numerous inaccuracies.”

Facebook CEO Mark Zuckerberg and Google CEO Larry Page both ripped the new accounts about their companies being involved in PRISM and said the federal government has no access to their servers.

On Friday, President Obama said the Meta data did not include who made the calls or the contents of the conversations.

In 2007 candidate Barack Hussein Obama politicized the practices of the Bush Administration of spying on suspected terrorists by saying that his administration would never track the private lives of anyone who was not directly suspected of having committed a crime. He guaranteed he would never wiretap or track American citizens.