Notice: Function add_theme_support( 'html5' ) was called incorrectly. You need to pass an array of types. Please see Debugging in WordPress for more information. (This message was added in version 3.6.1.) in /home/kj8d9sfz7jzn/public_html/federalistpress.com/wp-includes/functions.php on line 5831
 Obama Adviser Attempts to Spin Scandals 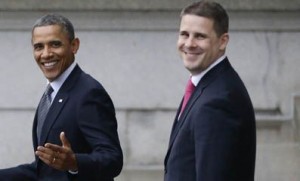 WASHINGTON –  A top White House adviser staked out a defiant defense Sunday on a series of scandals that have hit the Obama administration, going so far as to say it was an “irrelevant fact” where the president was the night of the Benghazi terror attacks and saying the Obama administration wouldn’t cooperate in “partisan fishing expeditions” over IRS officials targeting Tea Party groups.

Dan Pfeiffer went on five Sunday talk shows where he tried to reverse the damage done to the Obama administration this week by a series of scandals. On “Fox News Sunday” he tried to hammer home that the president only heard that the IRS unfairly targeted Tea Party groups “when it came out in the news.”

Sen. Rand Paul, R-Ky., who also appeared on “Fox News Sunday,” suggested there was a written policy to target political groups opposing the president but when pressed for proof, he was unable to provide details.

On ABC, Pfeiffer said the law governing the targeting of conservative groups was “irrelevant.”

“You don’t really mean the law is irrelevant do you?” host George Stephanopoulos asked.

Pfeiffer clarified his statement, “What I mean is that whether it’s legal, or illegal is — is not important to the fact that it — that, the conduct as a matter.  The Department of Justice said they’re looking into the legality of this.  The president is not going to wait for that.  We have to make sure it doesn’t happen again regardless of how that turns out.”

Earlier this week, a Treasury Department inspector general report revealed that Tea Party and other groups that had been critical of Obama received extra scrutiny when applying for a tax-exempt status from the government. According to the report, IRS agents had not flagged similar liberal or progressive groups.

The incident was traced back to an Ohio IRS office that had singled out conservative groups and held up their applications or demanded information from them like donor information, which is illegal. Many groups would not or could not provide the confidential information and as a result had to suspend their applications.

Pfeiffer also took the bold step of demanding Republicans owe Susan Rice, the U.S. ambassador to the United Nations, an apology for alleging she played a part in formulating the White House’s response to the attacks in Benghazi, Libya, last year that killed four Americans.

Pfeiffer said that the release of more than 100 pages of Benghazi emails and notes show “beyond a shadow of the doubt” that accusations she tried to change the narrative of what happened in the attacks were false.

“And, frankly, I think that many of the Republicans who have been talking about this, now that they have seen the emails, owe Ambassador Rice an apology for the things they said about her in the wake of the attack,” he said.

He claimed on CBS’ “Face the Nation” that the issue of who changed the initial talking points on the attack is “largely irrelevant.” The Benghazi emails though did show top State Department officials involved in trying to water down the administration’s initial storyline to remove references to prior security incidents and warnings.

Another scandal hitting the White House this week involved the seizure of two months worth of telephone records of journalists at four Associated Press bureaus including Washington and New York.

AP President and CEO Gary Pruitt criticized the move Sunday, saying the Justice Department’s secret subpoenas sent a strong and negative message to sources and made them less willing to talk to AP journalists.

Pruitt said on CBS’ “Face the Nation” it was not only unconstitutional but also damaging to the ideal of a free press in the country.

“It will hurt,” he said. “We’re already seeing some impact. Officials are saying they’re reluctant to talk.”

The Justice Department disclosed the seizure of two months of phone records in a letter the AP received May 10. The letter didn’t say why the organization was targeted. Last week, Pruitt had said in a statement on the AP website that it was difficult to defend its actions since it was not told by the government what it did or what prompted the subpoenas.

Prosecutors later said they were looking into government leaks on a foiled Al Qaeda plot in Yemen before it was made public last year. Justice officials also alleged the AP’s story would have put Americans at risk, a claim the AP strongly refuted.

Published May 19, 2013 / FoxNews.com / The Associated Press contributed to this report.