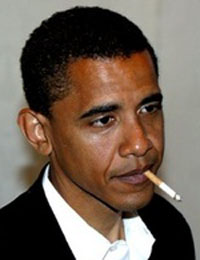 Barack Hussein Obama is indeed president of the U.S. due only to the principle of Affirmative Action.

Obama is a man who possessed no qualification to be the president of the United States of America, or the leader of the free world. His only qualifications listed on his public resume were 1) Foreign Exchange Student?, 2) Law School “Professor”, 3) Community Organizer, 4) State Senator, and 5) freshman U.S. Senator. Each of these “qualifications” is the direct result of special treatment afforded “an articulate young black” man with political ambitions and connections to unsavory anti-American, leftist, underworld characters.

What do we mean by Foreign Exchange Student? In fact, Obama was unknown to his fellow Columbia classmates, and no one recalls seeing him in any classes he says he took at the university. A 2008 Wall Street Journal article cited a survey of 400 people who were Columbia students from 1981 to 1983 and found no one who remembered him. The only people who knew him as a child have said that he presented himself as a foreign exchange student.

On his book publicity bio (right –>) he says of himself: “. . . was born in Kenya and raised in Indonesia and Hawaii.” Our point here is not to suggest that Obama was actually born in Kenya, because the “birthers” have yet to prove their pet theory, it is to prove that Obama himself garnered special attention and favors as he was growing up through false claims like being “born in Kenya.”

Regarding Mr. Obama’s tenure as a Law School Professor, the man was never a professor, but merely collected a paycheck for having an office at the University of Chicago Law School. He lectured infrequently, in any capacity, and was rarely seen by anyone at the school.

Community Organizer is one of those catch-all terms, meaning that Obama was active in leftist political causes. By his own admissions in his multiple autobiographies, from his early youth Obama was influenced by friends of his parents and grandparents who were blatant communists and socialists. He was a drug user and dealer, and frequently attended anti-American rallies and strategy sessions throughout his formative years.

Obama was elected an Illinois State Senator in 1996, suddenly unopposed in the election, and took office in 1997, where he remained until 2004 when he ran for the U.S. Senate seat. As a state senator he was often a no-show, and learned to vote “present” instead of yea or nay, to avoid creating a track record.

As a U.S. Senator Obama voted as a straight leftist, but 143 days into his term launched his bid for the presidency, and stopped voting on most issues thereafter.

Obama’s resume is the lightest of any U.S. president, and lighter than most U.S. Senators, or even most House members. What qualified him to be the president of the United States? He was “given” opportunities by those who thought that it was time for a black American to get a chance in the White House, just as he was given opportunities for education at expensive universities based on a false narrative.

Contrast Obama with a true American patriot and qualified African American presidential candidate like Dr. Ben Carson, as one of several examples, who worked hard and overcame obstacles on his own, without affirmative action policies to give him an automatic pass to the front of every line, and you see two completely different men. Dr. Carson is a man of character, and has worked tirelessly to help others and to pioneer neurosurgery techniques, especially for children. That course leads to an understanding of economics, human nature and international relations that a drug dealing, anti-American dolt like Barack Hussein Obama will never fathom.