Notice: Function add_theme_support( 'html5' ) was called incorrectly. You need to pass an array of types. Please see Debugging in WordPress for more information. (This message was added in version 3.6.1.) in /home/kj8d9sfz7jzn/public_html/federalistpress.com/wp-includes/functions.php on line 5831
 Obama Met with Anti-Tea Party Union Head Day Before IRS’ Targeting Began 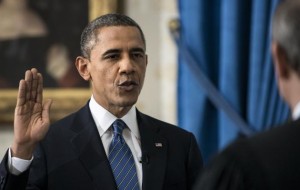 The American Spectator has broken a story on President Obama meeting with the head of an “anti-tea party” union head the day before the IRS began targeting conservative groups.

According to searchable White House visitor logs, the President of the National Treasury Employees Union Colleen Kelley met with the President of the United States on March 31st, 2010, just one day before the Inspector General’s report shows the top tax agency began targeting tea party and conservative groups for audits and other forms of harassment.

The timing of the meeting with Kelley is purely circumstantial, and we do not know the content of her meeting with the chief of the “most transparent administration” in U.S. history. But Kelley heads a left-wing union with 150,000 members, including representation of IRS employees, that gave 94% of its 2010 interim election campaign contributions to Democrats, who often ran against tea party-backed opponents.

In terms of the timing, page 37 of the Inspector General report explains how the IRS’ targeting of tea party, patriot and 9/12 groups was confirmed to be known by agency higher-ups on April 1st, 2010. Again, a screenshot of the document is provided:

This doesn’t seem like a mission carried out by some rogue agents at the IRS. ABC’s Jonathan Karl lays out exactly how the politically motivated targeting developed, and had roots in IRS employees’ application searches in March 2010:

As we reported on “Good Morning America” this morning, the IRS began targeting “Tea Party or similar organizations” in March 2010. That was when the Cincinnati-based IRS unit responsible for overseeing the applications for tax exempt status starting using the phrases “Tea Party,” “patriots” and “9/12″ to search for applications warranting greater scrutiny.

During this first phase, 10 Tea Party cases were identified. By April of 2010, 18 Tea Party organizations were targeted, including three that had already been approved for tax-exempt status.

By June 2011, the unit had flagged over 100 Tea Party-related applications and the criteria used to scrutinize organizations had grown considerably, flagging not just “Tea Party” or “Patriot” in group names, but also groups that were working on issues like “government debt,” “taxes” and even organizations making statements that “criticize how the country is being run.”

It looks like there’s definitely there “there.” The American Spectator documents exhaustively Colleen Kelley’s often bragged-about “collaboration” with the White House. The report ends with the portentous questions: “What did the President know? And when did he know it?”