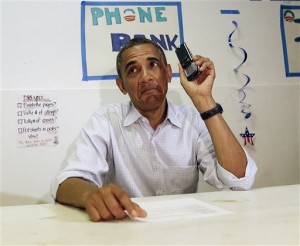 What started out as an effort by President Reagan to help poor people in rural areas have a phone in cases of emergency has mushroomed into what critics suspect is a new welfare program.

“The cost has gone from $143 million a few years ago to $2.2 billion today,” Republican Louisiana Sen. David Vitter said, noting that today’s cost is 15 times what it was.

The cost of the program increased dramatically after cellphones were added in 2008. Only low-income people on welfare and food stamps legally qualify, but some lawmakers say the program is out of control.

Sen. Claire McCaskill, a Democrat from Missouri, was incensed when she got an offer of a free phone.

“I got solicitation for a free phone at my apartment, which is certainly not a building where you’re going to have people who are qualified for free phones. … There is clearly money being wasted here.”

And Vitter adds, “The FCC, itself, said in a recent year there were 270,000 beneficiaries that had more than one of these subsidized cellphones. That’s completely against the law right there.”

Funded by a small tax on all phone bills, the program has exploded — with companies advertising free phones and offering 250 minutes.

Harold Feld of a group called Public Knowledge notes, “you have a lot of these prepaid-phone, no-contract options that are obviously very popular.”

The FCC told lawmakers the top five companies can’t verify the eligibility of 41 percent of those who get phones.

“I hear from law enforcement that these phones are often found at crime scenes and are used in drug deals,” Republican Rep. Tim Griffin of Arkansas said. “Why? It’s because you can’t trace them.”

“Just handing out phones willy nilly and allowing them to be sold on the black market,” Sen. McCaskill said. “This isn’t the way to do it, and we need to stop.”

Some recipients famously called them “Obama phones,” with one boasting to the media during the election that minorities should support the president precisely because he gave them free cellphones.

That is not true, and many are appalled by the abuse in the program. One supporter, however, argues cellphones are helpful because they’re not just for emergencies:

“It’s how we find jobs, it’s how we now participate in all the activities in the economy,” Feld said.

But McCaskill says those looking for work could simply check out a phone from the unemployment office or a shelter.

With so much abuse in the current program, she is now concerned about some new proposals: “What’s really worrisome to me is now the FCC wants to expand to this program into broadband. That’s a very bad idea, I think.”

She says such a waste of money makes taxpayers think government just isn’t paying attention. And she says the current program is so far out of control, we should simply scrap it and start over, not expand it.