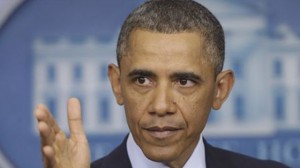 As President Obama prepares to head to Colorado on Wednesday to push gun control legislation, some are calling into question the validity of a key statistic he’s using to tout his message on near-universal background checks.
During several speeches, Obama has said 40 percent of all gun purchases were made without a background check. But that number is nearly two decades old and comes from a poll with a relatively tiny sample size.
Gun rights groups like the National Rifle Association, as well as The Washington Post’s “Fact Checker,” are calling out the president’s stat, saying his numbers on background checks need a background check of their own.During a speech last week, Obama asked, “Why wouldn’t we want to make it more difficult for a dangerous person to get his or her hand on a gun? Why wouldn’t we want to close the loophole that allows as many as 40 percent of all gun purchases to take place without a background check? Why wouldn’t we do that?”
The oft-cited figure, it turns out, was pulled from a 1997 study done by the National Institute of Justice. In the study, researchers estimated about 40 percent of all firearm sales took place through people other than licensed gun dealers. The conclusion was based on data from a 1994 survey of 2,568 households. Of those, only 251 people answered the question about where they got their guns.PolitiFact tracked down the co-author of the study, Duke University professor Philip Cook, and asked him if he thought the 40 percent estimate is accurate.“The answer is I have no idea,” Cook reportedly told PolitiFact. “This survey was done almost 20 years ago.”The National Rifle Association has questioned the 40 percent claim and says it’s a misrepresentation by gun control advocates to trump up support for universal background checks.

Another problem with the study is the sample size, 251 people, which is relatively small, and the data is open to interpretation.

“With this sample size, the 95 percent confidence interval will be plus or minus six percentage points,” The Washington Post fact-checker wrote on Tuesday. “Moreover, when asked whether the respondent brought from a licensed firearms dealer, the possible answers included ‘probably was/think so’ and ‘probably not,’ leaving open the possibility the purchaser was mistaken.”

When all of the “yes” and “probably was” answers were added together, 35.7 percent of those asked said they did not receive a gun from a licensed firearms dealer. If you round the number up, it becomes 40 percent but because the sample size is so small, rounding the number down to 30 percent could also be accurate, the paper noted.

But not everyone agrees with The Post’s fact checker.

“While slagging the president may be good for business, the effect of (the newspaper’s) false ruling is to undermine legitimate efforts to keep the public safe, and to obscure the real enemy of reliable data on gun violence,” Tommy Christopher of Mediaite wrote in a rebuttal Tuesday.

“It is possible to conclude that as few as 26.4% of gun owners in that study ‘purchased’ their gun without a background check, 20.4% if you factor in the margin of error,” he said.

The administration has not responded to questions surrounding the number and why they continue to use it to promote their gun control measures.

The president isn’t the only one who’s used the 40 percent figure to make a point. Many others stumping for the cause have pulled from the same info pile.

“There’s a loophole where you can sell guns without a background check,” he said last year, on July 22.  “Forty percent of guns are sold that way.”

For months, both sides of the debate on gun control – from the local level all the way up to the national level — have accused the other of inflating figures and manipulating data.

Obama, in using an array of stats and studies and polls, has tried to make the case that the Senate is considering common-sense proposals that most Americans support. Amid resistance from some lawmakers, the president is ramping up his campaign for the legislation. He plans to visit Denver on Wednesday, followed by a stop next Monday in Hartford, Conn., the state that was the site of the deadly mass shooting in Newtown in December.