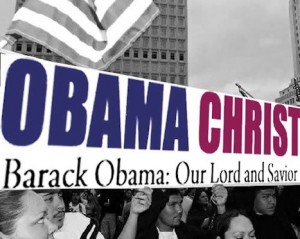 President Barack Hussein Obama’s open war on Christianity was officially launched less than three months into his presidency on April 15, 2009, when he insisted that the gold “IHS” monograms for the name of Christ be covered up with black painted plywood in Gaston Hall at the Catholic church’s Georgetown University, where he delivered a speech on economics. Didn’t that very thing happen in “Damien: Omen II”?

Of course, Barack Obama has always been hostile toward Christianity, and Christian principles, championing anti-Christian causes like gay marriage (although he flipped against it for a few years to get elected, then recently flipped back to rally his base), abortion (which has eliminated tens of millions of American blacks from our population), the poverty and servitude of debt and the government dole, and general principles of immorality (yes, Christianity teaches virtue and honesty). Although he claims to be Christian, when it serves him, his professed brand of “Christianity” is a Black Liberation Theology, which has its roots in Marxism–an anti-Christian philosophy.

Then there was the contrived “war on women” that Obama declared was extant in the conservative camp. Of course, “pro-woman” according to the left necessarily means anti-baby (kill them where they live), anti-child, anti-marriage, anti-family, and anti-virtue (a characteristic becoming of both sexes, but a 4-letter-word to the left). Stay at home mothers “haven’t worked a day in their lives” according to those in the Obama camp, and are unworthy of inclusion in a serious discussion of what women desire in America. Ms. Fluke was paraded out as the poster child for women who demand that the government provide free contraceptives for their extramarital, recreational sex. If conservatives feel that the open availability of contraceptives is sufficient for women, then that just shows how anti-woman they are, according to the Obama camp, because American taxpayers should be burdened with the costs of extramarital recreational sex for law students and other leftist activists who no longer believe in personal virtue before marriage. If Rush Limbaugh dares enumerate the type of women that flaunt premarital recreational sex, then he is necessarily a bigot. How completely Orwellian.

Most recently, when the Catholic Church declared that it was abhorrent to their religious beliefs and practices to provide birth control to Catholic Church employees, as mandated under Obamacare, the administration told them to sit down and shut the hell up, because Obama decides what the church will do, not God and his word. The church has filed suit against the administration, as have the majority of the states in the union who have received similar abuse by a power-mongering administration run amok.

The president and his anti-Christian cronies have done everything they set out to do, and the constitutionality of their acts will be weighed in the balance by Article III courts. The left has waged war against Christianity for several decades, chipping away at the First Amendment with every prohibition of free exercise.  Now, they are attacking actual establishments of religion, taking on the largest in the country, with over 60 million members. For those on the left who have no idea where the terms “free exercise” and “establishment of religion” come from, let us provide a brief lesson in Constitutional law:

“Congress shall make no law respecting an establishment of religion, or prohibiting the free exercise thereof;” First Amendment to the Constitution.

POTUS is not the PONTIFF. The federal government has overreached–again–and its time they got their wings clipped. We urge all Catholics, and all other Christians to vote against Obama’s anti-Christian rampage in the upcoming elections.