Notice: Function add_theme_support( 'html5' ) was called incorrectly. You need to pass an array of types. Please see Debugging in WordPress for more information. (This message was added in version 3.6.1.) in /home/kj8d9sfz7jzn/public_html/federalistpress.com/wp-includes/functions.php on line 5831
 OBAMACARE IMPLOSION – Congress Paralyzed as Insurers Seek Massive Premium Hikes 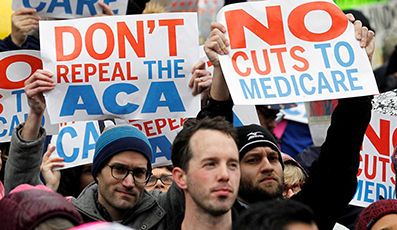 Top health insurance companies in numerous states are looking to hike premiums by double-digits – some by roughly 30 percent or more – for ObamaCare plans in 2018, according to newly released figures that could light a fire under stalled efforts on Capitol Hill to fix the program.

“A lot of us have lost focus on the fact that the system we have doesn’t work,” White House Budget Director Mick Mulvaney told “Fox & Friends” on Wednesday, referring to the proposed premium hikes.

Other states also could see double-digit hikes, including New Mexico, Tennessee and Texas – while elsewhere, insurers are eyeing smaller increases.

The requests are preliminary and could change before insurers strike 2018 agreements with federal officials in the fall.

But they underscore concerns about Affordable Care Act plans becoming increasingly unaffordable, as Republicans struggle to come up with an ObamaCare replacement bill that can pass Congress.

Their latest legislation – the so-called “skinny repeal” – failed by a single vote in the Senate last week, leaving lawmakers split over whether to “move on” and tackle issues like tax reform or regroup and try again. President Trump is urging Republicans not to give up, and even some Democrats have started to float ideas for shoring up the law, without scrapping it.

“I do think it’s important that they continue to work on health care,” Mulvaney said. “ObamaCare’s still broken. It was just as broken today as it was last week; in fact, more so.”

However, while the premium hikes could energize GOP efforts to upend the Affordable Care Act, they also could fuel Democrats’ criticism over how Republicans are handling to repeal/replace debate.

The Journal reported that insurers are concerned about Trump’s threat to halt payments to the industry that in turn help bring down costs, as well as whether Republicans will continue to enforce the individual mandate to buy insurance.

According to the Journal, one insurer in Montana linked the bulk of its proposed 23 percent increase to those two concerns.