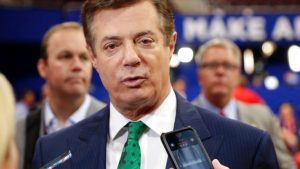 Former Trump campaign chairman Paul Manafort and his associate Rick Gates were reportedly told to surrender to federal authorities on charges including tax fraud as part of the special counsel’s investigation into Russian meddling and potential collusion with Trump campaign officials during the 2016 presidential election.

According to The New York Times, Manafort and Gates will face the first charges in the special counsel’s investigation, though the charges are not immediately clear.

Manafort is expected in federal court in Washington, D.C. on Monday, according to the Wall Street Journal. The indictment is expected to be unsealed later Monday.

Gates is a longtime associate of Manafort. According to the Times, his name appeared on documents linked to companies that Manafort’s firm created in Cyprus to receive payments from politicians and businesspeople in Eastern Europe.

The special counsel’s office declined to comment to Fox News on the report.

White House lawyer Ty Cobb told Fox News he had no comment on the report at this time.

It was widely speculated that Manafort would receive the first charges in Special Counsel Robert Mueller’s investigation.

Manafort has been investigated for his dealings in Ukraine several years ago, for which he did not register as a foreign agent until June 2017.

But House Oversight Committee Chairman Trey Gowdy, R-S.C., said on “Fox News Sunday” that it was unclear who would be charged.

From the New York Times:

WASHINGTON — Paul Manafort surrendered to federal authorities Monday morning, after a person close to the case said the first charges were filed in a special counsel investigation.

The charges against Mr. Manafort, President Trump’s former campaign chairman were not immediately clear but represent a significant escalation in a special counsel investigation that has cast a shadow over the president’s first year in office. Also charged was Mr. Manafort’s former business associate Rick Gates, who was also told to surrender.

Mr. Manafort walked into the F.B.I.’s field office in Washington about 8:15 a.m. with his lawyer.

Mr. Gates is a longtime protégé and junior partner of Mr. Manafort. His name appears on documents linked to companies that Mr. Manafort’s firm set up in Cyprus to receive payments from politicians and businesspeople in Eastern Europe, records reviewed by The New York Times show.

Mr. Manafort had been under investigation for violations of federal tax law, money laundering and whether he appropriately disclosed his foreign lobbying.

Attempts to reach Mr. Gates on Monday were not successful. A spokesman for Mr. Manafort did not immediately respond to a request for comment.

I understand that Trump owns property abroad and has access to a plane capable of overseas flights. Clearly, he is a flight risk. I think we…

Trump may promise to pardon all those caught in Mueller’s web, including himself, but there will come a time when enough is enough and his…

Mr. Manafort has expected charges since this summer, when F.B.I. agents raided his home and prosecutors warned him that they planned to indict him. That warning raised speculation that Mr. Manafort might try to cut a deal to avoid prosecution.

Get the latest on the special counsel investigation — and other major news — delivered to your email inbox.

Mr. Trump’s lawyer, Ty Cobb, said there were no concerns that Mr. Manafort would offer damaging information about the president in exchange for a deal.

Some close to Mr. Manafort, including his former business partner Roger J. Stone Jr., have said he had nothing to offer that would help prosecutors build a case against Mr. Trump.

“He’s not going to lie,” Mr. Stone said in September.

Mr. Manafort, a veteran Republican strategist, joined the Trump campaign in March 2016 to help keep delegates from breaking with Mr. Trump in favor of establishment Republican candidates. Mr. Trump soon promoted him to chairman and chief strategist, a job that gave him control over day-to-day operations of the campaign.

But Mr. Trump fired Mr. Manafort just months later, after reports that he received more than $12 million in undisclosed payments from Viktor F. Yanukovych, the former Ukrainian president and a pro-Russia politician. Mr. Manafort spent years as a political consultant for Mr. Yanukovych.

American intelligence agencies have concluded that President Vladimir V. Putin of Russia launched a stealth campaign of hacking and propaganda to try to damage Hillary Clinton and help Mr. Trump win the election. The Justice Department appointed Robert S. Mueller III as special counsel in May to lead the investigation into the Russian operations and to determine whether anyone around Mr. Trump was involved.

Mr. Trump has denied any such collusion, and no evidence has surfaced publicly to contradict him. At the same time, Mr. Trump and his advisers this year repeatedly denied any contacts with Russians during the campaign, only to have journalists uncover one undisclosed meeting after another.

The New York Times revealed in July that Mr. Manafort and others close to Mr. Trump met with Russians last year, on the promise of receiving damaging political information about Mrs. Clinton.