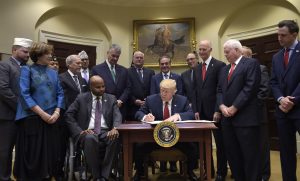 President Trump on Friday signed a bill that would protect whistleblowers while making it easier to fire employees at the Department of Veterans Affairs.

The Department of Veterans Affairs Accountability and Whistleblower Protection Act passed by Congress earlier this month streamlines the process to remove, demote, or suspend VA employees for poor performance or misconduct. In addition, it authorizes the VA secretary to recoup any bonuses awarded to employees who have acted improperly.

Under the new law, protections for whistleblowers will be expanded and the VA will be prevented from dismissing an employee who has an open complaint against the department.

The bill helped Trump follow through on a 2016 campaign promise.

The law marks the second time Congress has tried to change the disciplinary process at the VA. In 2014, the Choice Act was passed and tried to cut senior executives’ rights to appeal discipline to the Merit Systems Protection Board. However, a court ruled that it was unconstitutional and violated the Constitution’s appointments clause.

Ahead of the signing, Concerned Veterans for America, a conservative advocacy group, hailed the legislation as a positive step forward in a “new era of accountability, customer focus, and integrity at the department.”