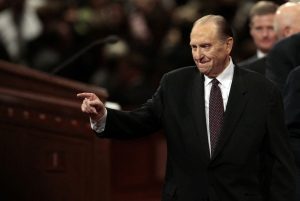 SALT LAKE CITY — More than half a century before he became the 16th president of the LDS Church, Thomas S. Monson, who died at 10:01 p.m. Tuesday in his Salt Lake City home at age 90, was an inexperienced, 23-year-old Mormon bishop with a distressing problem that would define his life.

He had the distinct spiritual prompting to leave a priesthood leadership meeting as his stake president was speaking and visit an elderly member of his congregation in the hospital. It seemed rude to stand, shuffle over 20 people and exit as his presiding leader spoke. Instead, he sat uncomfortably until the talk ended, then bolted for the door before the closing prayer.

At the hospital, he ran down the corridor. He stopped when he saw commotion outside the room of the man he was to visit. A nurse told him the man had died, calling Bishop Monson’s name as he passed away. Shattered, the fledgling bishop went outside and wept, sobbing. He vowed then, in the parking lot of the old Veterans Hospital in Salt Lake City’s Avenues, that he would never turn a deaf ear to another prompting.

“It’s the most impressive story I know from him about his ministry to the one,” said Elder Jeffrey R. Holland of the church’s Quorum of the Twelve Apostles. “As far as I know he kept that promise ever since. It became fundamentally characteristic of his life and what sets him apart from others, that he committed to this idea of following a prompting, and the focus almost always was a single person.”

Still, he will be most remembered for his individual ministry, a relentless drive to go to the rescue. President Monson’s biographer described his lifelong, tender ministry to widows, the lost, the obscure, the dying and the downtrodden as a portable pool of Bethesda, the New Testament place of mercy and grace where waters made the lame whole and Jesus Christ healed a paralyzed man. President Monson carried what he himself termed “Bethesda’s blessing” of heartfelt ministry to a grease pit, countless hospitals and behind the Iron Curtain.

Elder Holland believes that President Monson, born on Aug. 21, 1927, in Salt Lake City, had a special gift for personal, one-on-one ministration that he honed throughout his life.

“I think,” Elder Holland said, “that is probably the single-most startling and admirable characteristic in a very admirable life.”

A large, faithful, energetic, gregarious, intelligent man with a prodigious recall that allowed him to memorize talks and remember everyone he met, President Monson shot through the ranks of church leadership, as a bishop at age 22 and president of the faith’s Canadian Mission at 31. He was unthinkably young, just 36, when he was ordained a modern apostle of Jesus Christ on Oct. 4, 1963. No one younger has been called as an LDS apostle in more than a century. The last younger apostle, Joseph Fielding Smith, was ordained at age 33 in 1910; he also lived to become church president.

The senior quorums of the LDS Church are vaults of institutional memory. New apostles are trained by the quorum’s senior apostles. As a new apostle in 1963, President Monson joined a quorum with a handful of men who knew or were raised by Latter-day Saint pioneers who crossed the plains in 1847. They could speak from experience about the church before the Manifesto that ended polygamy in 1890.

By the time of his death, his past relationships in the quorum made President Monson unique among living LDS senior leadership. He was the final prophet to have served in the Twelve with church leaders who had known men who knew the first, Joseph Smith.

President Monson also was the final living apostle called to the Twelve by late church President David O. McKay. He was the last apostle alive who had served with President McKay’s immediate successors at the head of the church, Joseph Fielding Smith and Harold B. Lee. The man expected to succeed President Monson, President Russell M. Nelson, is 93, but he was ordained an apostle more than 20 years after President Monson, in 1984.

“History and feeling a part of that continuity is a wonderful part of this ministry,” said Elder Holland, who knew President Monson for 49 years, in a 2015 Deseret News interview that has not been published before.

One Sunday while still a young bishop, President Monson noticed a teenage boy missing from priesthood meeting. This time, he left his meeting. He went to the boy’s home. His mother said her son was working at the West Temple Garage in Salt Lake City. President Monson drove to the garage and searched until he noticed two eyes shining up out of a grease pit.

“You found me, Bishop!” said the boy, who later said he decided that Sunday morning, as he looked up at his bishop from a grease pit, that he would serve a church mission.

“There was a bishop on a rescue mission for someone who it would be easy to see as a nameless, faceless young man,” Elder Holland said, “but he wasn’t nameless or faceless to Thomas Monson. It’s a great story. We’ve all loved it.”

President Monson shared that experience in a 1997 general conference talk about what he called “the importance of building a bridge to the heart of a person.”

He was the final bridge to a vital moment in church history, as the last man alive who was present in June 1978 when church leaders received the revelation giving the priesthood to all worthy men.

Seven years earlier, he and then-Elders Gordon B. Hinckley and Boyd K. Packer set apart three black men to lead the Genesis Group for African-American Latter-day Saints in Salt Lake City. In March 1972 he wrote in his journal: “I am very impressed with these three black brethren who comprise the presidency of this group. Certainly they have been subjected to a lot of injustice and long for the day when they may be able to hold the priesthood. I can honestly say that I have no racial prejudice whatsoever toward such individuals and join with them in a desire that their request might one day be granted by the Lord.”

In 1978, he gave President Spencer W. Kimball a written opinion that favored petitioning the Lord again with a plea to extend the priesthood to all worthy men. He called the announcement of the revelation “a moment of exultation.” As chairman of the Missionary Executive Committee, he assigned the first black missionary. He performed the first sealing for a black family in an LDS temple. And he attended the first Genesis Group meeting where the sacrament was served, administered and passed by black members with the priesthood.

Elder Holland said President Monson was an example of someone who refined and magnified a spiritual gift. He did not simply remember the lesson learned as a 23-year-old bishop; he developed it.

“He’s pursued that gift,” Elder Holland said, “and he’s been conscientious about it.”

One afternoon while still a young apostle, President Monson gazed at the ceiling of the old Deseret Gym, where the church’s Conference Center now sits, as he swam the first of what were to be several laps of backstrokes. Again came a spiritual prompting. This time he felt he should go visit a seriously ill friend experiencing paralysis.

President Monson cut short his exercise, dressed and hurried to bring that figurative pool of Bethesda imagined by his biographer Heidi Swinton in “To the Rescue” with him to University Hospital in Salt Lake City. He found his friend slumped in a wheelchair at the far end of the facility’s therapy pool. He walked down and greeted the man, wheeled the chair around and took him back to his room. He didn’t know the man had been contemplating a way to propel the wheelchair into the pool.

“President Monson didn’t know that,” Elder Holland said. “He just went down and greeted him with that enthusiastic, hail-fellow-well-met attitude of his. For the rest of his life, that brother testified of that crucial moment. Who’s to say if President Monson had finished another 10 laps and taken his time to get up to the hospital or waited until after work that night to go up, I don’t know, but there might not have been a friend there to receive him. All history will say is: He was there at the right time, at the right moment, for the right reason, and that again is so characteristic of his life.”

He also reminded church members that it wasn’t the waters of Bethesda’s pool that healed the man in the New Testament. “Rather,” President Monson said, “his blessing came through the touch of the Master’s hand.”

Another prompting led him to fly abruptly to East Germany, behind the Iron Curtain, to give a blessing to a woman with pneumonia. He also was famous for giving away his suits. Elder Holland emotionally described one such instance during an October 2014 general conference talk.

“The image of him I will cherish until I die is of him flying home from then–economically devastated East Germany in his house slippers because he had given away not only his second suit and his extra shirts but the very shoes from off his feet.”

President Monson shuffled in those slippers through a terminal in Chicago’s famed O’Hare Airport.

“It seemed so characteristic,” Elder Holland told the Deseret News. “I confess I probably would have been a little self-conscious about that, but there’s absolutely no evidence in the telling of the story that he was. It’s just so uniquely him.”

Ann Monson Dibb, one of three children born to President Monson and his wife, Frances — who died in May 2013 after 64 years of marriage — once said her father lived three scriptures from the Book of James.

“First, James 1:22: ‘Be ye doers of the word, and not hearers only.’ Second, James 1:25: ‘A doer of the work, this man shall be blessed in his deed.’ And third, James 1:27: ‘Pure religion and undefiled before God and the Father is this, To visit the fatherless and widows in their affliction, and to keep himself unspotted from the world.’ No matter what their trial or sorrow may be, (my father) extends his hand. He lifts them, steadies them and supports them as they apply their own faith and trust in their Savior, Jesus Christ.”

The humanity of the story of the 23-year-old bishop who failed to promptly follow a prompting but learned a life lesson illustrates the reason President Monson was such a powerful and popular speaker, Elder Holland said. Stories from his personal ministry resonate with people.

23 comments on this story
“We either identify with being the recipient of such a gift,” Elder Holland said, “or we might hope and dream that some day we might be good enough to do that ourselves. The church is large, a lot of things about the church can be institutional, congregations are massive, we put 21,000 in that Conference Center. Everything’s big now, and so be it. I’m glad. We need a lot more people, and we need to go to a lot more places. But somehow we all respond — I think every one of us identifies — when a story comes down that cuts through all the institutional framework and all the numbers of the congregations and all the complexity of structure and gets down to, ‘That could have been my wife or my daughter in that hospital or my son or my nephew in that grease pit or my dad at that swimming pool.'”