Notice: Function add_theme_support( 'html5' ) was called incorrectly. You need to pass an array of types. Please see Debugging in WordPress for more information. (This message was added in version 3.6.1.) in /home/kj8d9sfz7jzn/public_html/federalistpress.com/wp-includes/functions.php on line 5831
 President Trump Signs Russia Sanctions Bill 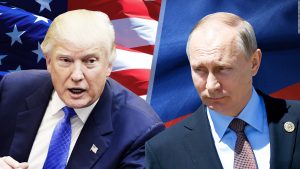 President Trump on Wednesday signed a bill imposing sanctions on Russia, after the legislation overwhelmingly passed the House and Senate.

The stiff financial sanctions were championed by lawmakers in both parties, and Trump’s signature could escalate tensions with Moscow — which already has ordered a reduction in the number of U.S. diplomats in Russia.

The bill itself targets Iran and North Korea as well as Russia.

But a cornerstone of the legislation was a provision barring Trump from easing or waiving the additional penalties on Russia unless Congress agrees. The provisions were included to assuage concerns among lawmakers that the president’s push for better relations with Russian President Vladimir Putin might lead him to relax the penalties without first securing concessions from the Kremlin.

The Senate passed the bill, 98-2, two days after the House pushed the measure through by an overwhelming margin, 419-3. Both were veto proof numbers, upping pressure on Trump to sign the legislation.

The legislation is aimed at punishing Moscow for meddling in the 2016 presidential election and its military aggression in Ukraine and Syria, where the Kremlin has backed President Bashar Assad.

Signing a bill that penalizes Russia’s election interference would mark a significant shift for Trump. He’s repeatedly cast doubt on the conclusion of U.S. intelligence agencies that Russia sought to tip the election in his favor. And he’s blasted as a “witch hunt” investigations into the extent of Russia’s interference and whether the Trump campaign colluded with Moscow.

The 184-page bill seeks to hit Putin and the oligarchs close to him by targeting Russian corruption, human rights abusers, and crucial sectors of the Russian economy, including weapons sales and energy exports.

In recent days, though, Trump has suggested he’s tougher on Russia than many believe.

The bill underwent revisions to address concerns voiced by American oil and natural gas companies that sanctions specific to Russia’s energy sector could backfire on them to Moscow’s benefit. The bill raised the threshold for when U.S. firms would be prohibited from being part of energy projects that also included Russian businesses.

Lawmakers said they also made adjustments so the sanctions on Russia’s energy sector didn’t undercut the ability of U.S. allies in Europe to get access to oil and gas resources outside of Russia.