Notice: Function add_theme_support( 'html5' ) was called incorrectly. You need to pass an array of types. Please see Debugging in WordPress for more information. (This message was added in version 3.6.1.) in /home/kj8d9sfz7jzn/public_html/federalistpress.com/wp-includes/functions.php on line 5831
 Recording Released of Trump’s Call to Gold Star Wife-Trump’s Critics Proved Wrong 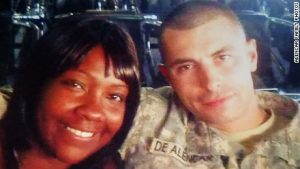 Gold star widow Natasha De Alencar released audio on Friday morning of the phone conversation she had with President Trump after it was revealed her husband had died in combat, according to The Daily Caller.

“I am so sorry to hear about the whole situation. What a horrible thing, except that he’s an unbelievable hero,” Trump told her.

Trump also told the widow if she is ever in Washington D.C. that she is welcome in the Oval Office.

The call was released after Gen. James Kelly addressed the press on Thursday, saying that he thought at least the lives of soldiers who’d died for Americans’ freedoms should remain sacred in this country.

Kelly made his remarks after Congresswoman Frederica Wilson told press she had secretly listened in on the president’s phone call with a Gold Star widow and that he’d told her her husband “knew what he signed up for.”