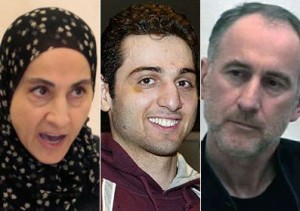 The CIA had Tamerlan Tsarnaev’s name put into a terror watchlist after being contacted by Russian authorities in 2011, sources told Fox News — raising more questions about why the Boston bomber’s trip to Russia the following year didn’t raise more red flags.

In October 2011, the CIA sent information to many federal agencies and to “the watchlisting system” about him, the sources say. That step ultimately put him on the vast TIDE database of people potentially tied to terrorism cases.

The FBI has said previously that it was told Tsarnaev was a “follower of radical Islam” and was preparing to travel to a foreign country to join unspecified underground groups. The FBI said that it responded by interviewing Tsarnaev and family members, but found no terrorism activity.

In early 2012, Tsarnaev would travel to Russia for six months. The nature of that trip is still unclear.

Two top Republican senators are now calling for a Senate Homeland Security Committee hearing on the Boston Marathon bombings, as lawmakers question whether enough was done to prevent the attack.

Sens. John McCain, R-Ariz., and Kelly Ayotte, R-NH, requested the hearing Wednesday, saying “it has become increasingly apparent that more questions need to be answered regarding the failure to prevent this tragedy.”

The senators cited the reporting by Fox News and others that Russian officials contacted the U.S. government at least twice in 2011 with concerns about Tsarnaev, the Chechen who two years later would carry out last week’s deadly bombing of the Boston Marathon, as an example of an instance that merits further investigation.

“In a string of apparent intelligence-sharing lapses, Tamerlan Tsarnaev was able to slip through the cracks and carry out this devastating attack,” the senators said.

Authorities suspect Tsarnaev, 26, and his younger brother, Dzhokhar Tsarnaev, of using improvised explosives to kill and maim runners and spectators near the finish line of the Boston Marathon. Three people were killed and more than 200 injured in the April 15 attack.

Tamerlan Tsarnaev was killed days later in a shootout with police. His 19-year-old brother escaped but was captured alive Friday night and now faces a charge of use of a weapon of mass destruction that could carry the death penalty.

The brothers immigrated to the United States about a decade ago with their family. Dzhokhar Tsarnaev became a U.S. citizen last year, but Tamerlan had not yet earned citizenship.

Senators, after being briefed on the case Tuesday, said the U.S. government had “multiple contacts” with Russia about the older Boston bombing suspect, but those lawmakers wouldn’t offer any more details.

Fox News was told the FBI tried to determine if Tsarnaev had any ties to terrorism, but those efforts apparently proved inconclusive.

“We did everything we could,” one FBI source said, and their assessment was based on the “totality of the evidence.”

The FBI insists, despite suggestions to the contrary, that it was contacted only once by the Russians about Tsarnaev.

Rep. Dutch Ruppersberger, D-Md., said Wednesday that the U.S. made three inquiries with Russia about Tsarnaev and got no response.

Lawmakers and investigators are taking a close look at Tsarnaev’s trip to Russia in January 2012. His father says his son stayed with him in Dagestan.

Despite violence there, Anzor Tsarnaev said Sunday that his son did not want to leave and had thoughts on how he could go into business. But the father said he encouraged him to go back to the U.S. and try to get citizenship. Tamerlan Tsarnaev returned to the U.S. in July.

His mother said that he was questioned upon arrival at the airport in New York.

“And he told me on the phone, ‘Imagine, mama, they were asking me such interesting questions as if I were some strange and scary man: Where did you go? What did you do there?'” Zubeidat Tsarnaeva recalled her son telling her at the time.

Fox News’ Mike Levine and Catherine Herridge and the Associated Press contributed to this report.