Notice: Function add_theme_support( 'html5' ) was called incorrectly. You need to pass an array of types. Please see Debugging in WordPress for more information. (This message was added in version 3.6.1.) in /home/kj8d9sfz7jzn/public_html/federalistpress.com/wp-includes/functions.php on line 5831
 ‘Referendum on Trump’ Fails for Dems – GOP Winner in Kansas 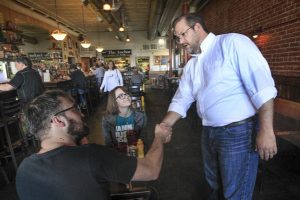 FROM THE LOS ANGELES TIMES:

When President Trump plucked conservative members of Congress to fill his Cabinet, it set off a slew of special elections — starting with Tuesday’s contest in Kansas.

These were supposed to be no-brainer affairs.

Trump easily won the Wichita-area district held by Mike Pompeo, now the CIA director, since 2011. The opening offered an easy elevation for the party-picked candidate, Ron Estes, the state treasurer.

But that’s not what happened. Democratic unrest over Trump made this race — and the others coming — a referendum on the new administration.

Democrats have rallied around the underdog, James Thompson, putting him in striking distance.

The political newcomer’s resume made him a candidate to watch: He was homeless as a child, joined the Army and later went to college, becoming a civil rights attorney. He and his wife have one daughter, Liberty.

A Republican loss so early in the special-election season — with an even closer race shaping up next week in Georgia’s 6th District in the Atlanta suburbs — has put the party on high alert.

Trump tweeted support of Estes on Tuesday morning and recorded a robocall, according to the Wichita Eagle.

“Ron Estes is running TODAY for Congress in the Great State of Kansas. A wonderful guy, I need his help on Healthcare & Tax Cuts (Reform),” Trump tweeted.

Losing one seat to Democrats wouldn’t necessarily be devastating for House Republicans. They are in no immediate danger of losing their robust majority.

But a win would carry big symbolism for Democrats, who continue to struggle to find their political footing after the 2016 loss to Trump.

And it could set the stage for the summer as campaigns start forming for the 2018 midterm elections, when Democrats will try to win back seats from the GOP majority in the House and Senate.

In what is sure to be a low-turnout spring vote, the nonpartisan Cook Political Report shifted its assessment of the GOP’s hold on the Kansas seat from “likely Republican” to “lean Republican.”

“Even a single-digit finish in a seat like KS-04 … would portend big trouble for Republicans in next week’s special primary election in GA-06,” according to the Cook analysis. “There is a real chance Democrat Jon Ossoff, who is dramatically outspending the rest of the field while the main GOP contenders turn on each other, could hit 50 percent on April 18 and avoid a runoff. As such, we are moving GA-06 to Toss Up.”