Notice: Function add_theme_support( 'html5' ) was called incorrectly. You need to pass an array of types. Please see Debugging in WordPress for more information. (This message was added in version 3.6.1.) in /home/kj8d9sfz7jzn/public_html/federalistpress.com/wp-includes/functions.php on line 5831
 Rep. Michele Bachmann Says She Will Not Run for Re-election in 2014 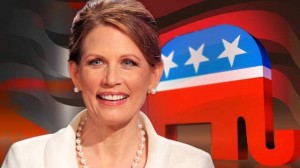 Congresswoman Michele Bachmann says she will not run for re-election in 2014, ending her tenure as the representative from Minnesota’s sixth congressional district after four terms.In a video released on her website early Wednesday

, the Tea Party favorite says that, in her opinion, if presidents can only serve eight years that length of time is sufficient for her to serve in Congress.

Bachmann claims her decision was not influenced by concerns that she would not be re-elected, or by recent inquiries into her 2012 presidential campaign.

In January, a former Bachmann aide filed a complaint with the Federal Election Commission, claiming Bachmann made improper payments to an Iowa state senator who was the state chairman of her 2012 presidential run. The aide, Peter Waldron, also accused Bachmann of other FEC violations.

Bachmann says she considered not running again for her House seat in 2012 after her failed presidential bid, but felt another Republican candidate would not have enough time to adequately prepare for the race.

“I will continue to work overtime for the next 18 months in Congress defending the same constitutional conservative values we have worked so hard on together,” Bachmann says in the video.

Bachmann had given few clues she was considering leaving Congress. Her fundraising operation was churning out the regular pitches for the small-dollar donations that Bachmann corralled so well over the years, and she had an ad running on Twin Cities television talking about her role in opposing President Obama’s health law.

As for her plans beyond Congress, Bachmann said, “There is no future option or opportunity, be it directly in the political arena or otherwise, that I won’t be giving serious consideration if it can help save and protect our great nation.”

Published May 29, 2013 / FoxNews.com / The Associated Press contributed to this report