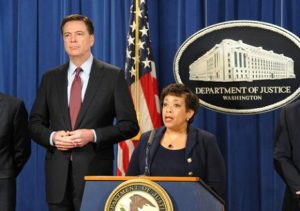 FBI Director James Comey distrusted former Attorney General Loretta Lynch and senior officials at the Justice Department, believing they might provide Hillary Clinton with political cover over her email server, according to a new report published Saturday by The New York Times.
The Times described Comey’s “go-it-alone strategy” in the Clinton probe as emerging largely from his suspicions that Lynch and others at Justice might seek to subtly downplay the Clinton investigation.
As an example, the Times reported that Lynch, during a meeting in September 2015, called on Comey to use the word “matter” instead of “investigation” when publicly discussing the case, three people who attended the meeting told the Times.

Lynch reportedly reasoned that the word “investigation” would raise a number of other questions. Furthermore, she argued that the department should maintain its policy of not confirming investigations.

After referring to the FBI the question of whether classified information had been improperly handled by Clinton through her use of a private server, a step toward a criminal investigation, Justice clarified that it was not a “criminal referral.”
This also raised suspicions at the FBI, according to the Times. Clinton seized on the wording to say that what the FBI was conducting was “not a criminal investigation.”
Lynch came under pressure to recuse herself from the investigation entirely after she had a discussion with former President Bill Clinton in June 2016 on he plane as it sat on the tarmac of Phoenix’s airport.
Lynch did not recuse herself, but the situation did lead her to say she would accept whatever conclusions career prosecutors and the FBI reached.
More tensions between the FBI and Lynch’s office came up later in the case.
Months after Comey held a press conference to announce that the FBI would not bring criminal charges against Clinton, new emails were found through a separate investigation into former Rep. Anthony Weiner (D-N.Y.), who was married to top Clinton aide Huma Abedin.
The findings put the FBI in a difficult spot, as Comey wanted to tell Congress about what the FBI had found. He worried that if Congress was not notified, it would appear that the FBI was withholding information just before the election.
Lynch, the Times story said, did not want Comey to send the letter but decided against ordering him not to send it.
By Nikita Vladimirov