Notice: Function add_theme_support( 'html5' ) was called incorrectly. You need to pass an array of types. Please see Debugging in WordPress for more information. (This message was added in version 3.6.1.) in /home/kj8d9sfz7jzn/public_html/federalistpress.com/wp-includes/functions.php on line 5831
 Rice Caught in Lie on National TV: ‘I Know Nothing About This’ 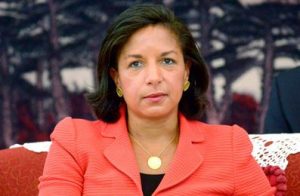 Less than two weeks before sources said it was Susan Rice who requested to unmask the names of Trump associates caught up in sensitive intelligence reports, former President Barack Obama’s national security adviser said she knew “nothing about” surveillance allegations.

Rice told PBS on March 22 that she “was not aware of any orders given to disseminate that information.” She did skirt the issues of whether she herself unmasked or disseminated information outright. Rice also limited her remarks to Trump’s debunked early March tweet claiming a wiretap of Trump Tower and vague remarks made by House Intelligence Committee Chair Devin Nunes.

[pullquote]”I know nothing about this.” – Susan Rice, on the unmasking of Americans[/pullquote]

“I know nothing about this,” Rice said at the time. “I was surprised to see reports from Chairman Nunes on that count today … So today, I really don’t know to what Chairman Nunes was referring. But he said that whatever he was referring to was a legal, lawful surveillance and that it was potentially incidental collection on American citizens.”

Fox News reported that the names, once unmasked, were widely disseminated through the intelligence community – and to some in the Obama White House.

Rice’s remarks on March 22 focus on the strict legality of the issue — instead of whether the unmasking was appropriate or of intelligence value. Since Monday’s reporting, her defenders have downplayed the significance of her apparent requests.

“What I know is this … If the intelligence community professionals decide that there’s some value, national security, foreign policy or otherwise in unmasking someone, they will grant those requests,” former Obama State Department spokeswoman and Fox News contributor Marie Harf said on “The First 100 Days.” “And we have seen no evidence … that there was partisan political notice behind this and we can’t say that unless there’s actual evidence to back that up.”

Harf stressed that just because Rice requested names doesn’t mean she leaked them either.

The identities of U.S. citizens collected during surveillance on foreign targets are supposed to be shielded unless they are unmasked by a top official, ostensibly for national security reasons.

Rice hasn’t made any public statements since her PBS appearance and a Wall Street Journal op-ed released the same day excoriating the behavior of the Trump administration. In the opinion piece, Rice scolded the Trump White House, saying it “deliberately dissembles and serially contorts the facts.” 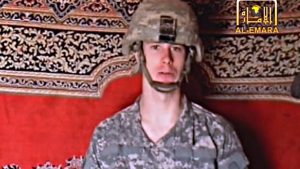 Rice, however, has her past issues with public statements.

Rice was an early defender of Bergdahl, who now faces court martial for desertion.

She infamously went on Sunday morning talk shows in the wake of the Benghazi terror attack to claim the assault was spurred on by a little-known YouTube video, an allegation that proved false.

She also said former Taliban hostage Army Sgt. Bowe Bergdahl served with “honor and distinction” in June 2014, soon after his release from enemy captivity. Seven months later, Bergdahl was court martialed on charges of desertion and misbehavior before the enemy.