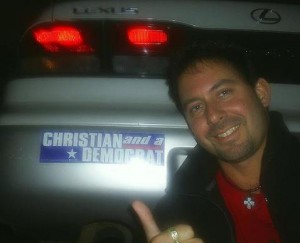 The Mississippi man suspected of sending deadly ricin in letters to President Obama and a senator from his home state is no stranger to local police, who have long viewed him as a paranoid conspiracy theorist prone to violence.

Paul Kevin Curtis, a sometime-Elvis impersonator who appeared in a Mississippi federal court Thursday and denied wrongdoing, has penned numerous rants accusing the government of hounding him. Many of his screeds have ended with the same line his letter to President Obama reportedly did: “I am Kevin Curtis and I approve this message.”

An affidavit released by the Department of Justice quotes Curtis’ letters to Obama, Sen. Roger Wicker (R-Miss.) and a judge as saying: “Maybe I have your attention now even if that means someone must die.”

“Maybe I have your attention now even if that means someone must die.”- Ricin-laced letter sent to President Obama

Curtis has claimed unknown forces blew up his car, interfered in his personal relationships and rigged Elvis impersonation contests. His rants, which have appeared at ripoffreport.com on his Facebook page seem to stem from 2001, when, as a cleaner hired by a morgue, he claims to have found bags of body parts, including a severed head. After reporting his discovery to authorities, Curtis came to believe he was made a “person of interest where my every move was watched and videotaped.”

, a forum for people to complain about purported scams, a man who identified himself as Curtis detailed in 2007 how the alleged incident began his spiral.

Curtis claims he sought help from elected officials, including Wicker, who was his congressman prior to being elected to the Senate in 2007.  Wicker told CNN he has met Curtis and believed him to have “mental issues.”

Curtis reportedly wrote that he is on the “hidden front lines of a secret war” on his Facebook page hours before federal agents arrested him at his home in Corrinth Wednesday. He is being held in the Lafayette County Detention Center.

“My mother wants me to SHUT UP. My brothers fear me. My sister hates me. . . . I have lost most of my friends,” he wrote. “I have spent more than $130,000 on legal fees in 13.5 years. . . . They destroyed my marriage, they distracted my career, they stalked, they trolled, they came into my home, took my computers, had me arrested 22 times and guess what? I am still a thorn in the corrupt anals! I will remain here until Jesus Christ decides its time for me to go.”

The letters to Obama and Wicker, which bore Memphis postmarks, have tested positive for ricin. The ones sent to Washington were opened in a remote facility and no one appears to have been harmed by them. The FBI has said there is no indication of a connection between the letters and the Monday bombing in Boston that killed three people and injured more than 170. The letters to Obama and Wicker were postmarked April 8, before the marathon.