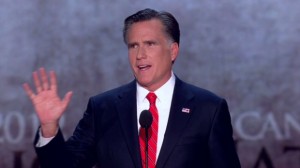 Following testimonials from parishioners who spoke of a humble, kind man of tireless service, a solid endorsement from Hollywood A-lister Clint Eastwood and a rousing speech from Florida Senator Marco Rubio, GOP presidential candidate Mitt Romney took the stage at the RNC and accepted his party’s nomination to be the president of the United States.

Sharing intimate details of his life and faith, Romney then made a strong case that under the Democrat leadership of President Obama the country is much worse off than it was 4 years ago.

Offering his alternative to 4 years of crushing pressure on America’s middle class, Governor Romney laid out his 5 Point Plan to bring America back from its economic brink:

First, by 2020, North America will be energy-independent by taking full advantage of our oil, our coal, our gas, our nuclear and our renewables.

Second, we’ll give our fellow citizens the skills they need for the jobs of today and the careers of tomorrow. When it comes to the school your child will attend, every parent should have a choice and every child should have a chance.

Third, we’ll make trade work for America by forging new trade agreements. And when nations cheat in trade, there will be unmistakable consequences.

And fourth, to assure every entrepreneur and every job creator that their investments in America will not vanish as have those in Greece, we will cut the deficit and put America on track to a balanced budget.

And fifth, we will champion small businesses, America’s engine of job growth. That means reducing taxes on business, not raising them. It means simplifying and modernizing the regulations that hurt small business the most. And it means that we must rein in the skyrocketing cost of health care by repealing and replacing ‘Obamacare.’

Romney appealed heavily to women in his acceptance speech, echoing a theme he established for the RNC, and quoted his mother as she was running for the U.S. Senate. “I can still see her saying, in her beautiful voice, ‘why should women have any less say than men about the great decisions facing our nation?'”

Embracing his entrepreneurial expertise and nearly meteoric success with the company he started with a handful of friends, Romney recounted their humble beginnings.

“So we started a new business called Bain Capital. The only problem was, while we believed in ourselves, not many other people did. We were young and had never done this before, and we almost didn’t get off the ground. In those days, sometimes I wondered if I had made a really big mistake. By the way, I’d thought about asking my church’s pension fund to invest, but I didn’t. I figured it was bad enough that I might lose my investors’ money, but I didn’t want to go to hell too.”

Romney made an obvious calculated decision to play it safe with his acceptance speech, going easy on a failed Obama, a man he painted as being in over his head, and simply introduced himself to moderate Independents and Democrats who may have tuned in, leaving the heavy lifting to previous speakers, most of whom hit it out of the park in detailing the many and profound failings of the current administration.

To illustrate the differences between the globally focused Obama presidency and his own American-centric vision, Mitt Romney offered, “President Obama promised to begin to slow the rise of the oceans — and to heal the planet. My promise is to help you and your family.”