Notice: Function add_theme_support( 'html5' ) was called incorrectly. You need to pass an array of types. Please see Debugging in WordPress for more information. (This message was added in version 3.6.1.) in /home/kj8d9sfz7jzn/public_html/federalistpress.com/wp-includes/functions.php on line 5831
 Romney Schools Obama 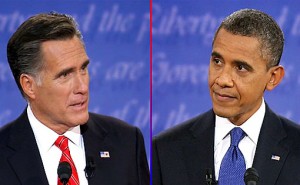 In the first of three presidential debates held Wednesday evening GOP challenger Mitt Romney won a decisive victory over the incumbent, Barack Hussein Obama. Obama’s performance was lackluster, to say the least, while Romney appeared energetic, friendly, and in command.

Obama began his opening statement informing the audience that America should not look at the past, implying we should ignore his record, but to the future. For the entire 90 minutes Obama explained why the federal government should be expanded along with Americans’ tax burden.

Romney was on the offensive all evening delivering blow after blow to the President’s record and devastating economic policies, and the President stammered and stuttered while trying to explain why Americans should entrust him with the presidency for another 4 years.

Obama repeatedly attempted to simply recite campaign rhetoric and democratic party talking points about his own record and the proposed economic fixes proffered by Romney, but Romney just as often set the record straight in an authoritative and convincing manner, in what appeared to be a humiliating challenge to the president’s heretofore unchallenged “facts.” At one point Romney chided Obama that because he had 5 sons, he was used to people telling him untruths and simply repeating them in an attempt to persuade him of their veracity, but that the technique was wasted in the presidential race, because although Obama was entitled to a private plane and house as president, he was not entitled to “private facts.”

Romney clearly got in some of the best lines of the evening, describing Obama’s economic policy as “trickle down government.” When Obama accused Romney of being the defender of big oil company tax breaks, Romney retorted that most of the $2.8 billion tax breaks go to small and middle sized oil exploration companies, not big oil, and that the amount is a mere pittance compared with the $90 billion that Obama palmed for his cronies in the wind and solar industries–an amount that equals 50 years of oil tax breaks. Romney quoted a friend who recently observed that Obama doesn’t just pick winners and losers in meting out government billions to green companies, he just picks losers, referring to the recent insolvency of many of the recipients, being run by big contributors to the president’s campaign.

Romney further chastised Obama’s assertion that his plan is to “invest” in 100,000 new teachers to boost America’s failing education system, when the $90 billion he had wasted on “green energy” projects would have hired 2 million teachers.

Obama appeared perturbed for most of the whipping, staring off at moderator Jim Lehrer or smirking and tensing his jaw as he looked down at his own notes. Romney looked presidential as he explained free-market economics to a befuddled Obama.

The exhibition was a resounding victory for Mitt Romney, and signs of a re-energized base were apparent as preliminary polls reflected the victory. Democrats were trying to spin the outcome in a favorable light, but the Internet and Twitter reflected that democratic supporters were very disappointed by the president’s inability to explain or defend his first 4 years in office, or to make a case for a repeat performance.