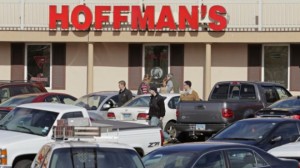 NEWINGTON, Conn. –  Customers packed gun stores around Connecticut on Tuesday ahead of a vote expected to bring sweeping changes to the state’s gun control laws, including a ban on the sale of large-capacity ammunition magazines like the ones used in the Newtown shooting and a new classification for more than 100 types of guns as banned assault weapons.

Lawmakers have touted the legislation expected to pass the General Assembly on Wednesday as the toughest in the country. Some measures would take effect right away, including the expansion of the state’s assault weapons ban, universal background checks for all firearms sales, and a ban on the sale or purchase of ammunition magazines holding more than 10 rounds. The bill also addresses mental health and school security measures in response to the massacre.

Gov. Dannel P. Malloy, a Democrat, supports the bill and could sign it into law as soon as Wednesday night.

In a state with a rich history of gun manufacturing, some companies said they feel the legislation made them into scapegoats for the deaths of 20 first-graders and six educators in the Dec. 14 massacre at Sandy Hook Elementary School. At least one ammunition magazine maker is more seriously considering offers to leave.

“My home is in Connecticut, but at this point, I don’t know if I can operate here legally come Wednesday afternoon,” said Jonathan Scalise, owner of Ammunition Storage Components in New Britain. He said it’s unclear to him whether employees in possession of banned firearms or ammunition would be breaking the law.

Gun shops across the state reported brisk sales Tuesday and said customers also checked on the status of orders that they worried could be canceled once the new laws take effect.

The parking lot at Hoffman’s Gun Center and Indoor Range in Newington was full Tuesday morning, with some drivers parking on the front lawn. Inside, customers waited in long lines to purchase what was left.

“I walked through. I walked out because they didn’t have anything. The girl told me what’s on the shelf is what they have. And I totally believe that,” said Nick Viccione, a gun owner from Wallingford. He said people are trying to load up on ammunition and buy “anything semi-automatic.”

At other shops, including the Delta Arsenal gun store in Wallingford, employees reported difficulty getting through to the state police to run background checks needed to complete gun sales.

Connecticut State Police Lt. J. Paul Vance said he hadn’t received any complaints of people not getting through to the office that handles such checks but acknowledged they might get a busy signal once in a while.

“The special licensing and firearms unit is going full bore,” he said.

The gun industry in Connecticut dates back to the Revolutionary War and says it supports more than 7,000 jobs in the state. Some companies say the new restrictions have them considering a move.

Mossberg has been in business since 1919 and employs 270 workers in Connecticut. It also has a manufacturing plant in Eagle Pass, Texas, and has been courted for years by other states.

“I’ve got a stack of invitations from governors, congressmen and economic development groups right here on my desk,” he said.

Mark Malkowski, owner and president of Stag Arms in New Britain, said he’s not threatening to move but that his biggest concern about staying in Connecticut is “staying in a state that does not support us.”

He said Stag Arms, which employs 200 people, manufactures about 72,000 rifles a year, at a cost of about $1,000 each. About 5 percent of the company’s sales are in Connecticut.

“It’s actually quite hypocritical, quite insulting,” he said. “If our products are so dangerous and so horrible that no Connecticut resident should be in possession of it, why is it OK to send it to the rest of the country?”

Echoing that was the National Shooting Sports Foundation.

“Connecticut’s firearms manufacturers will be forced to pay a price economically for the state’s double standard of you can build it here, but not sell it here, public policy formulation,” the Newtown-based trade association said in a statement.

Malloy said Tuesday he plans to write to the state’s gun manufacturers, informing them that as long as they are manufacturing a product that can be legally sold in the U.S. that they’re still welcome in Connecticut.

“Having said that, there are other things that need to be taken into consideration,” Malloy said. “And the public’s safety is one of those things.”

Nicole Hockley, whose 6-year-old son, Dylan, was killed at Sandy Hook, welcomed the legislation. She credited lawmakers with listening to the parents, who had opposed allowing existing high-capacity magazines to be grandfathered into the law. Legislators did allow that but also required the magazines to be registered by Jan. 1 with the state.

“This is going to be one of the strongest gun laws in the nation, and that will be a model for other states to follow and for federal leaders to follow,” she said.