Notice: Function add_theme_support( 'html5' ) was called incorrectly. You need to pass an array of types. Please see Debugging in WordPress for more information. (This message was added in version 3.6.1.) in /home/kj8d9sfz7jzn/public_html/federalistpress.com/wp-includes/functions.php on line 5831
 Russia Trolls Democratic Party in Epic April Fools’ Day Prank 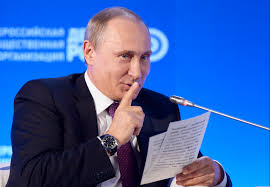 Russia is known for many things—communism, vodka and bizarre dancing, for starters—but one thing Russia is not well-known for is its sense of humor. Perhaps that’s about to change.

In what could go down as one of the most interesting April Fools’ Day pranks of all time, the Russian Foreign Ministry posted on its Facebook page an audio file that supposedly showed the agency’s new switchboard message.

The message begins with, “You have reached the Russian Embassy. Your call is very important to us.”

“To arrange a call from a Russian diplomat to your political opponent, press 1,” the recording continues (in both English and Russian). Users are then instructed to “press 2” in order “to use the services of Russian hackers.” For “election interference” requests, “press 3.”

The Associated Press reports—because, apparently, AP felt the need to check—it was able to confirm the recording was meant as a “joke.”

On Thursday, Russian President Vladimir Putin criticized those in the United States who continue to play the “Russian card” to score political points, alluding to the Democratic Party. He also called the accusations of election interference made against his government “endless and groundless,” according to a report by CBS News.