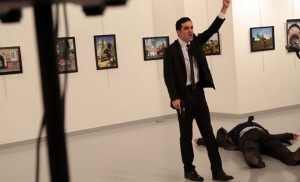 A news photographer captured the moment a well-dressed attacker opened fire inside an Ankara art exhibit Monday, shooting and killing Russia’s ambassador to Turkey and wounding at least three other people before he was killed in an apparent Islamic terror attack.

Shortly after the attack ended, the U.S. State Department tweeted about a reported shooting in the area of the U.S. embassy in Ankara and advised U.S. citizens to stay away. A previous alert said there was a “security incident” at the embassy. It was unclear if that incident was related to the attack on the Russian ambassador.

Still and video cameras were trained on Russian Ambassador Andrei Karlov, who was giving a speech when a man in short hair and a dark suit suddenly shot Karlov in the back. Video captured of the incident shows Karlov grimacing and falling to the ground as the gunman moving toward his body. An Associated Press photographer on the scene took several images of the gunman and Karlov lying on the ground.

Turkish media reported the gunman had been killed. Foreign Ministry spokeswoman Maria Zakharova made the announcement that Karlov had been killed in a live televised statement.

The assassin was identified as a Turkish special forces police officer, Ankara mayor Melih Gokcek told AFP. Gokcek said the attack was aimed at ruining relations between Turkey and Russia. The two countries had begun normalizing ties in June 2016. That followed a strained period caused when a Turkish combat aircraft shot down a Russian military jet in November 2015.

Click here to see graphic video of the attack in Ankara

The gunman could be heard yelling “Allahu akbar” and shouting Arabic verses popular with Jihadis, according to a FoxNews.com translation of video of the attack.

“Don’t forget Aleppo, don’t forget Syria,” he said. “As long as our…are not safe, you will not taste safety.”

The gunman then told those in the room to “Move back, move back.”

“Only death will get me out of here,” he said before again turning to the Syria conflict: “All those who have a share in this torture will pay one by one.”

The gunman could be heard shouting in Turkish “Don’t forget about Aleppo, don’t forget about Syria,” the BBC reported, citing a translation of video of the incident. Russian officials told Turkish newspaper Hurriyet that the perpetrator was believed to be an Islamic radical. The gunman could also be heard yelling “Allahu Akbar.” Russia is assisting the Syrian government in its campaign against rebel forces in that country.

“While [Karlov] was doing his tour of the exhibition, people that came in, they were really well dressed and, according to witnesses, they took out their guns and started shooting everyone,” said Sky News producer Guldenay Sonumut, who is based in Istanbul.

Another reporter in the room at the time of the shooting told Hurriyet the attacker fired several shots in the air before shooting Karlov in the back at least once.

“We condemn this act of violence, whatever its source,” Kirby said. “Our thoughts and prayers are with him and his family.”

Karlov is survived by a wife and a son.