Notice: Function add_theme_support( 'html5' ) was called incorrectly. You need to pass an array of types. Please see Debugging in WordPress for more information. (This message was added in version 3.6.1.) in /home/kj8d9sfz7jzn/public_html/federalistpress.com/wp-includes/functions.php on line 5831
 Schumer Shutdown Ending: Dems Blink as America Blames Them for Shutdown 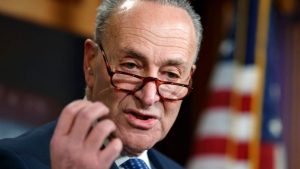 The Trump White House and Capitol Hill Republicans cranked up the pressure Monday on Democrats to abandon their immediate demands for immigration measures and vote in support of a temporary spending bill to end a government shutdown now in its third day.

“They shut down the government,” White House counselor Kellyanne Conway told “Fox & Friends” on Monday morning. “The pressure is on them.”

President Trump tweeted that Democrats shut down the government to appease the “far left base” and are now “powerless” to change course.

A critical test vote is now set for early afternoon on a measure to fund the government through Feb. 8. The vote would end a Democratic filibuster that forced the shutdown overnight Friday – and could require nearly a dozen total votes from Democratic members this time around.

Senate Minority Leader Chuck Schumer, D-N.Y., announced on the floor ahead of the test vote that they’ve reached an agreement — and “will vote today to re-open the government.”

He said this comes with a commitment to negotiate on immigration, and immediately consider such legislation if there’s no agreement by Feb. 8. 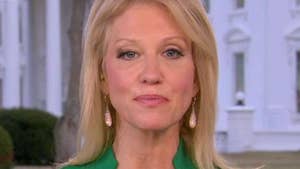 The vote will be the GOP-controlled Senate’s second attempt to break the filibuster, after failing to get the required 60 votes Friday. But whether Senate Majority Leader Mitch McConnell, R-Ky., has the votes remains unclear.

Republicans have a 51-49 member majority in the Senate. The Friday night vote was 50-49.

The Capitol Visitor Center is empty, as the government shutdown enters its third day.

Flake and Graham were part of a bipartisan group of senators that met Sunday to broker a possible deal in which rank-and-file members would provide the 60 votes, then perhaps help pass the spending bill later this week by a simple 51-vote majority. In exchange, McConnell has vowed to immediately address immigration reform.

“When the Democrat filibuster of the government funding bill ends, the serious, bipartisan negotiations that have been going on for months now to resolve our unfinished business — military spending;  disaster relief;  healthcare; immigration and border security — will continue,” McConnell said Sunday night in announcing the noon vote. “It would be my intention to resolve these issues as quickly as possible … Importantly, when I proceed to the immigration debate, it will have an amendment process that is fair to all sides. But the first step in any of this is re-opening the government and preventing any further delay.”

Graham and Flake are expected to support the spending measure this time. If that holds, and the five Democrats who supported the first bill support this one, an additional six Democrats are needed to break the filibuster. Pressure could be heavy on senators who represent states with large federal workforces – like Virginia’s Tim Kaine and Mark Warner and Maryland’s Ben Cardin and Chris Van Hollen. Likewise, Democratic senators up for reelection this fall or from swing states could face pressure – like Ohio’s Sherrod Brown or Pennsylvania’s Bob Casey.

Democrats have withheld the votes on a spending bill in an attempt to force Trump and fellow Republicans in Congress to include protections for illegal immigrants brought into the United States as children.

Trump has said he wants comprehensive immigration reform but that border security, particularly a U.S.-Mexico border wall, should be included in the plan.

Schumer, D-N.Y., argued again Sunday that he offered a compromise immigration plan to Trump to avoid a shutdown, including billions for his must-have wall.

“On Friday in the Oval Office, I made what I thought was a very generous offer to the president, the most generous offer yet,” Schumer said Sunday on the Senate floor. “The president must take yes for an answer. Until he does, it’s the Trump Shutdown.”

Republicans are adamant this is the “Schumer Shutdown.”

While the Democrats’ move appeals to their liberal base, they have faced backlash for forcing the shutdown, considering U.S. military personnel and nearly 1 million other federal employees will be furloughed and not receive pay until the government reopens.

Flake, who was part of the weekend bipartisan negotiations, later said, “We have a commitment to move to immigration,” but sounded uncertain about whether McConnell would have the votes. He also said the bipartisan group would meet again Monday before the vote.

Five Democratic senators voted Friday to end the filibuster: Sens. Doug Jones, of Alabama; John Donnelly, of Indiana; Heidi Heitkamp, of North Dakota; Joe Manchin, of West Virginia; and Claire McCaskill, of Missouri. They all face 2018 reelection in states that Trump won in 2016.