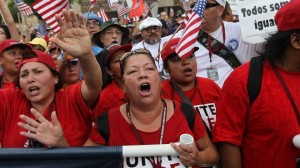 WASHINGTON –  The leader of a union representing 12,000 federal immigration officers said Monday his group is joining a growing list of similar organizations opposed to the sweeping immigration bill crafted by the Gang of Eight lawmakers and under consideration in Congress.

Kenneth Palinkas, president of the National Citizenship and Immigration Services Council, said his union was never consulted by the group of bipartisan lawmakers writing the bill, which he claims was written with special interests in mind and fails to address “some of the most serious concerns the USCIS Council has about the current system.”

The union represents officers of U.S. Citizenship and Immigration Services, the agency responsible for processing visas and other immigration papers.

Palinkas says the bill doesn’t address the pressure he claims is put on adjudication officers to rubber stamp applications instead of conducting diligent case reviews. He says it fails to fix the “insurmountable bureaucracy” which often prevents USCIS officers from contacting and coordinating with ICE agents in cases that should have their involvement, and doesn’t do enough to address the problem of student visa overstays.

“We are the very backbone of our nation’s immigration system and will be at the center of implementing any immigration reform,” Palinkas said in a statement obtained by FoxNews.com.

This month, the National ICE Council, which represents more than 7,000 agents, sent a letter to Congress sharply criticizing the legislation and saying it will not support it. There are three major unions that represent the country’s immigration officers and agents.

Members of the Senate’s Gang of Eight spent last week marking up the bill in the Judiciary Committee. On Tuesday, Florida Sen. Marco Rubio seemed to show signs of strain within the group after senators rejected a Republican proposal to require a biometric entry and exit system at ports of entry in the U.S.

President Obama has been cautiously optimistic about the Senate’s strategy of a bipartisan approach.

On Thursday, House negotiators also told reporters that they had reached a tentative agreement of their own but did not disclose details.