Notice: Function add_theme_support( 'html5' ) was called incorrectly. You need to pass an array of types. Please see Debugging in WordPress for more information. (This message was added in version 3.6.1.) in /home/kj8d9sfz7jzn/public_html/federalistpress.com/wp-includes/functions.php on line 5831
 Sen. Mike Lee-The First Step in Revoking Obama’s Land Grabs 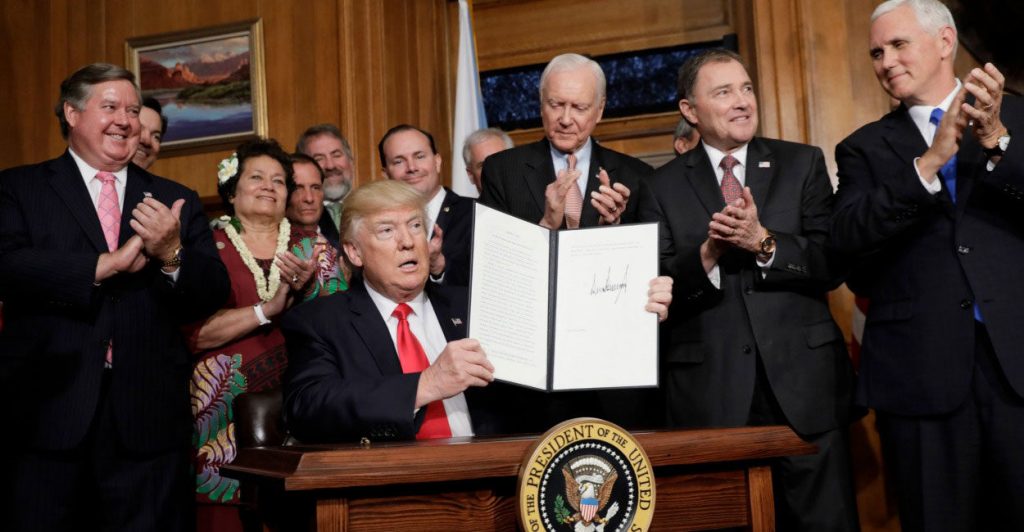 Former President Barack Obama began to learn that lesson this Wednesday when President Donald Trump signed an executive order directing Interior Secretary Ryan Zinke to conduct a review of all Antiquities Act designations larger than 100,000 acres over the past 30 years.

Specifically, the executive order directs Zinke to consider “the requirements and original objectives of the Act, including the Act’s requirement that reservations of land not exceed ‘the smallest area compatible with the proper care and management of the objects to be protected’” and whether “designated lands are appropriately classified under the Act as ‘historic landmarks, historic and prehistoric structures, [or] other objects of historic or scientific interest.’”

>>>See our article of November 21, 2016, by the late Utah Speaker of the House, Becky Lockhart: Western Lands Must Be Returned to States

This wording strongly suggests that Obama’s lame duck decision to designate 1.35 million acres in San Juan County as a national monument will at least be significantly reduced and possibly entirely rescinded.

Some environmental activists may claim that Trump does not have the power to shrink or revoke Obama’s Antiquities Act designations, but these claims are ignorant of both history and the law.

For starters, as University of California Berkeley Law School professor John Yoo and Pacific Legal Foundation Executive Director John Gaziano detailed in a recent legal report, five presidents have significantly reduced four previous monument designations, and no one has ever questioned the legality of those reductions. [pullquote]in his discretion, to declare by public proclamation … national monuments …. the limits of which in all cases shall be confined to the smallest area compatible with proper care and management of the objects to be protected.[/pullquote]

A current president’s power to alter a previous president’s flows from the text of the statute, which authorizes the president “in his discretion, to declare by public proclamation … national monuments …. the limits of which in all cases shall be confined to the smallest area compatible with proper care and management of the objects to be protected.”

As Yoo and Gaziano point out, “there is no temporal limit” on the requirement that a monument must be limited to “the smallest area compatible with proper care and management of the objects to be protected” so all presidents must use their ongoing discretion as to whether every monument is the proper size.

Yoo and Gaziano argue that the entire monument designation could be revoked.

Whatever Zinke does end up recommending to Trump—and a preliminary report is due in 45 days on Utah’s Bears Ears National Monument—further executive action will only be the beginning of solving San Juan County’s public lands issues.

Congress will then need to pick up the Public Lands Initiative legislation that was working through the House before Obama derailed the legislative process and pass a commonsense solution that includes real input from local residents.

Only through the legislation can local residents, including the Navajo, be given real power over their land use decisions. Mike Lee is a Republican senator from Utah.