Notice: Function add_theme_support( 'html5' ) was called incorrectly. You need to pass an array of types. Please see Debugging in WordPress for more information. (This message was added in version 3.6.1.) in /home/kj8d9sfz7jzn/public_html/federalistpress.com/wp-includes/functions.php on line 5831
 Senate Dems Poised to Advance Gun Ban, Seek Obama’s Help in NRA Battle

WASHINGTON –  Senate Democrats are poised to pass a renewed and strengthened assault-weapons ban out of committee Thursday as part of a package of measures advancing to the floor, but are appealing to President Obama to help battle opposition from Republicans and gun-rights supporters. 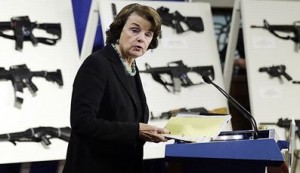 The Senate Judiciary Committee, after advancing bills earlier in the week to enact near-universal background checks and combat gun trafficking, on Thursday morning will take up what is arguably the most controversial measure drafted since the Newtown, Conn., shooting.

Sen. Dianne Feinstein’s effort to revive an assault-weapons ban, as well as a ban on large-capacity magazines, has revived a tense debate over gun rights in Washington and across the country. The panel seemed likely to approve the measure Thursday on a party-line vote. But once it reaches the full Senate — probably in April — the measure faces heavy opposition by Republicans and some moderate Democrats, as well.

Feinstein acknowledged she’d need more backing if it is to stand a chance on the floor — even then, it’s hard to imagine a circumstance where the Republican-controlled House would allow the measure to proceed.

“I’d like to see everybody doing more,” bill sponsor Sen. Dianne Feinstein, D-Calif., said Wednesday when asked if she’d like more assistance from Obama. “Yes, absolutely, we need help. We have the 800-pound gorilla out there” — a reference to the potent National Rifle Association.

Obama made an assault weapons ban part of the gun curbs he proposed in January, a month after a shooter with an assault rifle killed 20 first-graders and six educators at a school in Newtown, Conn. Feinstein and others have argued that such firearms are used in a disproportionate number of mass shootings and shouldn’t be available to civilians.

The prohibition has emerged as one of the most controversial of the gun restrictions being considered in Congress. Foes of barring the weapons say law-abiding citizens should not lose their Second Amendment right to own the weapons, which they say are popular for self-defense, hunting and collecting.

Feinstein’s bill would also ban large-capacity ammunition magazines carrying more than 10 rounds, which she and her allies say allow shooters to inflict more casualties before pausing to reload, which is when they might be stopped. Adam Lanza, the Newtown gunman, was said to have had 30-round magazines.

The measure’s passage by the Judiciary panel has been a foregone conclusion for some time. It will be far more vulnerable in the full Senate, where Democrats are expected to need 60 votes for passage through the 100-member chamber. That is where the NRA and other pro-gun groups are working hard for the ban’s defeat.

“We are focused on the next step of the legislative process,” Chris W. Cox, the NRA’s chief lobbyist, said Wednesday.

There are 53 Democrats plus two independents who generally side with them. Republicans seem ready to oppose the ban overwhelmingly, and Feinstein can’t count on a half-dozen Democrats from Republican-leaning states who face re-election next year.

The ban also stands little chance of approval in the GOP-controlled House.

Feinstein’s bill would ban semi-automatic weapons — guns that fire one round and automatically reload — that can take a detachable magazine and have at least one military feature like a pistol grip.

It specifically bans 157 named weapons. But in an effort to avoid antagonizing those who use them for sports, the measure allows 2,258 rifles and shotguns that are frequently used by hunters.

It also exempts any weapons that are lawfully owned whenever the bill is enacted.

Feinstein was a leader in passage of a 1994 ban on assault weapons and high-capacity magazines. Congress failed to renew it when it expired in 2004.

There are no definitive figures on assault weapons or high-capacity ammunition magazines in the U.S., since there are no government registries of firearms and Congress has curbed federal research on guns since the late 1990s.

When the previous assault weapons ban took effect in 1994, there were an estimated 1.5 million assault weapons and at least 25 million large-capacity magazines that were privately owned in the U.S.

Proponents of banning the weapons cite studies showing that once the assault weapons ban took hold, the portion of gun crimes using those firearms dropped by up to 72 percent in six cities surveyed. They also argue that each assault weapon taken off the streets reduces the potential for mass shootings.

Opponents cite studies showing that assault weapons have been used in fewer than 1 in 10 crimes involving firearms and argue that eliminating those weapons would put only a minor dent in gun violence. High-capacity magazines are involved in up to a quarter of gun crimes.

The Judiciary Committee has already approved three other measures expanding the requirement for background checks for gun buyers; toughening federal laws against illegal gun traffickers and those who purchase weapons for people barred from owning them; and increasing aid for school safety.