Republican Sen. Lindsey Graham, in an extensive interview with Fox News, alleged that the injured survivors of the Benghazi terror attack have been “told to be quiet” and feel they can’t come forward to tell their stories — as he urged the House to subpoena the administration for details if necessary. 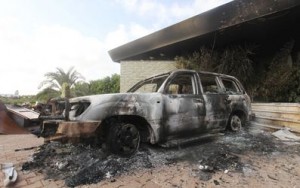 The South Carolina senator said he’s “had contact” with some of the survivors, calling their story “chilling.” He told Fox News that “the bottom line is they feel that they can’t come forth, they’ve been told to be quiet.”
The White House is denying any attempt to exert pressure on the surviving victims.

“I’m sure that the White House is not preventing anyone from speaking,” White House Press Secretary Jay Carney said, when asked about the survivors.

But Graham said he thinks the administration is “trying to cover it up,” citing the valuable information the survivors hold.

“The best evidence of what happened in Benghazi is not a bunch of politicians in Washington trying to cover their political ass,” Graham said. “This is the people who lived through the debacle, and I’m going to do all I can to get them before the Congress and American people.”

He continued: “We cannot let this administration or any other administration get away with hiding from the American people and Congress, people who were there in real time to tell the story.”

Graham continued to voice concern about the inaccurate or incomplete accounts that came from the Obama administration in the days following the attack. He is among a handful of Republican lawmakers pressing for access to and more information about the survivors.

But he had pointed words for the House Republican leadership, as he urged them to issue subpoenas if the administration does not release the names of the survivors.

“To our leadership in the House, you’re gonna have to up your game on Benghazi,” he said.

For his part, Graham vowed to “make life difficult in the Senate” in order to get the information he wants, suggesting that would involve holding up nominations.

“(The public needs) to hear from people who were on the ground, their desperate situation. They need to understand from people who were there for months how bad it was getting and how frustrated they were that nobody would listen to them and provide aid when they were requested,” Graham said. “This is a story of an administration deaf and blind to the reality of what people were living with every day in Libya.”

He said they should be able to “tell their story without fear,” accusing the administration of “hiding from the American people and Congress the primary source of truth in Benghazi – people who lived through it.”

A congressional source tells Fox News that Hill staffers investigating the attack believe about 37 personnel were in Benghazi on behalf of the State Department and CIA on Sept. 11. With the deaths of Ambassador Chris Stevens and three others, about 33 people were evacuated. Of them, a State Department official confirmed there were three diplomatic security agents and one contractor who were injured in the assault — one seriously.

While not denying the details, the State Department official offered no comment on the nature of the injuries or whether the agent was visited by Kerry or Hillary Clinton before she left office.

Leading Republicans in the Senate and House have been calling on the State Department to identify the injured and make them available to congressional investigators. So far, they say their calls have gone unanswered.

Rep. Jason Chaffetz, R-Utah, said the administration has provided “zero” documents on the matter and has not provided names of those attacked.

Rep. Frank Wolf, R-Va., has gathered about 60 signatures in support of a select committee to investigate the Benghazi terrorist attack. Wolf has said the committee is the most thorough and efficient approach to resolving the lingering underlying questions rather than the competing and overlapping committee jurisdictions.

Wolf, along with Rep. Dana Rohrabacher, R-Calif., and leading Senate Republicans Graham, John McCain of Arizona, and Kelly Ayotte of New Hampshire have pressed the State Department for answers.