Notice: Function add_theme_support( 'html5' ) was called incorrectly. You need to pass an array of types. Please see Debugging in WordPress for more information. (This message was added in version 3.6.1.) in /home/kj8d9sfz7jzn/public_html/federalistpress.com/wp-includes/functions.php on line 5831
 Sheriff Joe Arpaio Running for Senate in Arizona 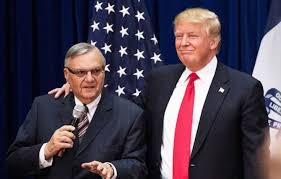 Republican Joe Arpaio, a close ally of President Trump and former sheriff known for his provocative approach to combatting illegal immigration, is running for Senate in Arizona.

The 85-year-old Arpaio could shake up the late August Republican primary in a critical open-seat race to replace retiring Sen. Jeff Flake, R-Ariz. Trump pardoned Arpaio last summer, sparing the former sheriff jail time after he was convicted of ignoring a federal court order in a racial-profiling case. 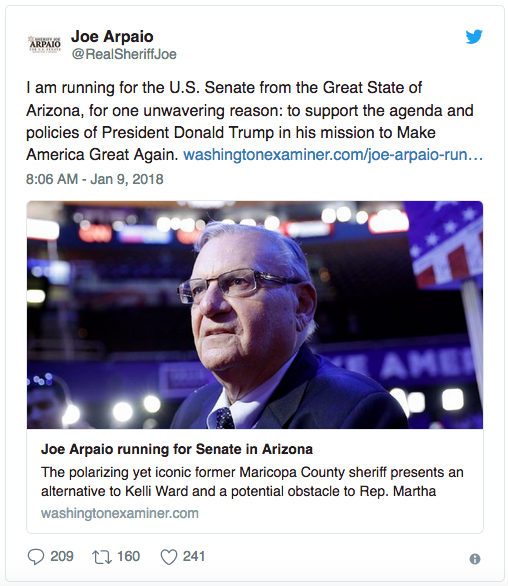 The polarizing yet iconic former Maricopa County sheriff, beloved by many conservatives for his hawkish immigration policies, presents an alternative to the unimpressive Kelli Ward and a potential obstacle to Rep. Martha McSally. She is expected to launch within days and is widely viewed as the Republicans’ strongest general election candidate.

In a telephone interview with the Washington Examiner, Arpaio shrugged off concerns about his age, dismissed Republican insiders’ anxiety that his poor reputation with nonwhite voters would put the seat in play for the Democrats in the midterm, and discussed plans to work with Trump on behalf of Arizona.

“I have a lot to offer. I’m a big supporter of President Trump,” Arpaio said. “I’m going to have to work hard; you don’t take anything for granted. But I would not being doing this if I thought that I could not win. I’m not here to get my name in the paper, I get that everyday, anyway.”

Arpaio served as the elected sheriff of Maricopa County, which encompasses Phoenix and surrounding suburbs, for 24 years until a Democrat ousted him in 2016.

Through strict opposition to illegal immigration and unorthodox policing methods, Arpaio cultivated a national image as a tough, law-and-order cop. That made him a favorite of conservative media and popular on the GOP endorsement circuit as Republicans throughout the country sought to bolster their border security bona fides in primaries.

Arpaio’s sharp rhetoric and law enforcement practices also drew intense criticism. Democrats, some Republicans, and advocates for immigrants — both legal and illegal — accused him of unconstitutional racial profiling and even bigotry. Arpaio said he expects more of the same in his Senate campaign, but vowed not to alter his approach.

“My mother and father came here from Italy, legally of course. I have a soft spot for the Mexican community having lived there,” he said. “I’m not going to get into my personal life, but I will say we have four grandkids and some have a different ethnic and racial background. I don’t say that. I don’t use my grandkids. So, I have a soft spot, but still, I’m going to do my job. You have to do it.”

“Being a U.S. senator is a little different than being the sheriff, because you can do a lot of things in the U.S. Senate, and I have many plans, believe me. It’s tough. It’s a tough decision. But, if you’re going to come across that border, you should be arrested and get the consequences of it,” Arpaio added.

Trump won Arizona in 2016 by just 4.1 percentage points. Democratic nominee Hillary Clinton was rising in the state until the final 10 days of the presidential campaign, when the FBI revealed that it was taking a fresh look into her use of a private email server during her tenure as secretary of state and halted her momentum.

Trump’s job approval numbers with nonwhites and suburbanites since have been poor. That’s potentially significant in Arizona, where both voting blocs can be influential.

To be sure, Arpaio’s reputation and close affiliation with Trump is virtually guaranteed to rev up a conservative base that had pushed the pragmatic Flake into retirement because of his feud with the president. That could work in his favor in a midterm, elections in which Republican turnout has tended to dominate. But in an election shaping up as challenging for the GOP, Arpaio’s candidacy could make nervous a party defending a 51-49 Senate majority.

Even if Arpaio loses the primary to McSally, he would have had seven months to push her to the right and define GOP messaging on a host of issues — and not just in Arizona. Trump is sure to promote Arpaio’s campaign, and Republican primary candidates all over the country might follow his lead.

Arpaio said he relishes the fight, whether from the Left or from supporters of McSally on the Right.

“I am outspoken. I’m looking forward to it. Let them come. They’ll have their political firing squads and bring tons of money here, because they don’t want to lose,” he said. “I just want to do everything I can to support our president.”

Arpaio said he expects Democrats to make an issue of the pardon. It was granted on Aug. 25, his wife’s 86th birthday. Arpaio noted that fact, and that he shares a birthday with Trump — June 14 — with a sense of satisfaction, as he did the periodic calls from the president to check in on his wife’s health.

The former sheriff said he has not personally discussed his Senate bid with Trump and emphasized that he didn’t ask for the pardon nor did he know that it was coming. But Arpaio did not apologize for it, calling his conviction part of a political witch hunt by former President Barack Obama and his first attorney general, Eric Holder.

Unprompted, Arpaio added that Flake, and Sen. John McCain, R-Ariz., with whom he said he has a “love-hate” relationship, opposed the pardon.

“This started under Obama and Holder 60 days after they took office and it took them all these years to get me on a contempt of court charge, a misdemeanor. You get the same time for barking dogs,” he said.

Arpaio was vague on his policy agenda beyond immigration enforcement. That’s not unusual. Candidates, especially at the beginning of a campaign, tend to try and keep their message focused on a few bullet points and maintain flexibility by not putting down too many markers.

Arpaio’s main offer to Arizonans: He would support Trump unflinchingly, should he win the nomination and defeat the likely Democratic nominee, Rep. Kyrsten Sinema. That’s not insignificant. Both Flake and McCain have a contentious relationship with the president, and he with them.

To that end, Arpaio suggested he could support some form of legalization of participants in the since discontinued Deferred Action for Childhood Arrivals, or DACA, program that protected illegal immigrants brought in as children from deportation. Of course, in typical fashion, Arpaio offered his own view of what should be done.

“I have a far-out plan, which may look stupid,” he said. “When they come to your attention that they’re here illegally, these young people, deport them back to Mexico — or whatever — and then try to put them on a fast track to come back into the United States legally with special permits. What’s wrong with that? They’d say they don’t know where their home country is, so let them go there and spend six months, because it might take that long to do paperwork to get them here legally and let them see their home country and see what it’s really like. They ought to be proud where they came from. I’m proud being an Italian American. I’m proud of Italy. I’m proud my father, mother came over, proud of it. So, you could kill two birds with one stone.”

“That would be no amnesty, everybody would be happy, you deport them and then let them come back with all their education here. I’m sure they could find a temporary job or help the foreign countries and build up relations and come back. That’s just a big picture that I have. People may say I’m crazy. What am I crazy about? It just makes sense.”