Notice: Function add_theme_support( 'html5' ) was called incorrectly. You need to pass an array of types. Please see Debugging in WordPress for more information. (This message was added in version 3.6.1.) in /home/kj8d9sfz7jzn/public_html/federalistpress.com/wp-includes/functions.php on line 5831
 Should GOP Rethink Abortion Policy? 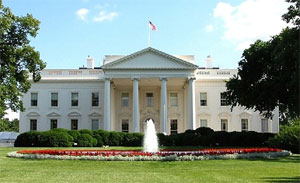 Following one of the worst performances for an American president in this nation’s history, Americans awarded Barack Obama a second term. What was the pitch from the far left that got him re-elected following four years of economic upheaval and government socialization of the medical industry?

The winning formula was 1) convincing voters that an honest business genius who had turned around the failing Olympics and the State of Massachusetts in short terms and had served his fellow humans all his life without fanfare or recognition was a greedy and uncaring monster to be avoided at all costs; 2) that the government should be the only source of one’s hope for prosperity and happiness; and 3) that government supplied birth-control and abortion-on-demand are the only rights worth preserving.

There has been much armchair quarterbacking post-election, and we hear of many in the GOP wringing their hands as they contemplate a strategy to again gain the White House and Senate. Proposals such as caving in on tax increases, ala George “Read My Lips” Bush are bandied about. Or winning strategies like “go along to get along” are being trumpeted by the party’s old guard.

The Federalist Press suggests that the GOP consider adopting a democratic party long-term strategy. Indeed, democrats have exercised control of American government for much of the past 100 years by long-term planning—which became necessary following the beating they took in the Civil War and post-war reconstruction, as republicans freed the slaves and passed and enforced the civil rights amendments.

Democrats have had 4 simple strategies for reacquiring power. 1) Class warfare, promulgated by taxing citizens at different rates—taking from some and giving to others. 2) Spending escalation, making the government the provider of goodies. 3) Create dependent underclass by impoverishing minorities and opening borders, making over ½ of voters dependent on government handouts. 4) Re-educating population through leftist takeover of media and education systems, to believe that socialism is the fairest system of government.

It’s that simple. So, can the GOP learn anything from the left?  Perhaps, but these tactics are naturally repugnant to those who espouse personal liberty, so it is doubtful.

What is in the abortion issue that could help the GOP, if as polls indicate, it is minorities who are voting in extremely high percentages for Democrats? Let’s revisit the founding of the birth control and abortion movement, and see what is behind it. 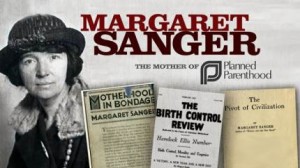 Planned Parenthood was founded by Margaret Sanger, and like-minded racists, like Dr. S. Adolphus Knopf and Lothrop Stoddard, a Harvard graduate and the author of The Rising Tide of Color against White Supremacy. Margaret Sanger was an ardent proponent of sterilizing those she considered “unfit,” which would be the “salvation of American civilization.” Who was unfit? Those of African descent.

Margaret Sanger and her followers were the regents of Western Eugenics, the practice of improving the human gene pool by eliminating undesirable DNA. She and her associates admired the Aryan dreams of the Nationalist Socialists (Nazis) in Germany, and like their counterparts, thought that exterminating lower life forms (Jews, Blacks) was a service to God and country. For those who might doubt that the founder of Planned Parenthood held these beliefs, please refer to some of her many articles and speeches on the subject such as “Some Moral Aspects of Eugenics” (June 1920), “The Eugenic Conscience” (February 1921), “The purpose of Eugenics” (December 1924), “Birth Control and Positive Eugenics” (July 1925), “Birth Control: The True Eugenics” (August 1928), and many others. 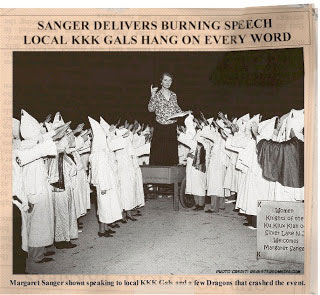 Indeed, as a direct result of the Sanger movement, even today, American black children suffer death by the millions at the hands of abortionists. Planned Parenthood is the largest abortion provider in America, with 78% of their clinics in minority communities. Although blacks make up only 12% of the population, 35% of all the abortions in America are black babies.

So when it comes to the political parties’ struggle for dominance in America, where should the parties come down on the abortion issue? With Democrats clamoring for dependent minority voters, they should be the ones who immediately outlaw the practice of murdering minority babies.  They would have at least 13,000,000 more black voters on the rolls if they had not killed them all.

Where does that leave the GOP on the abortion issue? Should they embrace the practice of killing minority babies to purify the voting gene pool?

That’s right America. This is who we’ve become. Embrace the left.