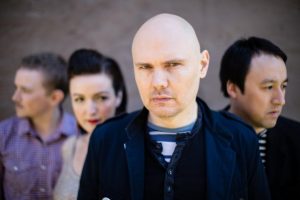 mashing Pumpkins founder Billy Corgan blasted social justice warriors and spoke up for the American dream in a wide-ranging interview on the Alex Jones Infowars radio show on Tuesday.

The outspoken rocker told Jones in the hopes of making a documentary-style show for TV about America, he traveled across the country in an RV with a veteran friend, writing songs and interviewing people about their views.

He’s trying to find a partner to make the series, looking to the model of the multi-part Netflix smash hit “Making of a Murderer.”

During the road trip, Corgan said he tried to transcend politics in “trying to get people to talk about America from a heartfelt point of view…whether the America they grew up believing in or not believing in is real or was it ever real?

“And what I found– it was really fascinating because I talked to people from every type of background– most Americans have a very shared conception of what America means. Two things that I heard over and over again were opportunity and hard work. That’s something they learned from their ancestors…that is in the American DNA.”

Visiting radio host Jones in his Austin, Texas studio while on a concert tour, Corgan added, “Now we’ve reached another critical mass point where where is the line of expansion? Is it immigration, in terms of tolerance…in terms of welfare sustainability. Where are the lines?”

In his travels, the rock star discovered, “When you talk about what America means, there’s a lot of love left in people’s hearts for this country.”

Later in the interview with Jones, however, Corgan sounded off against Left-wing social justice warriors, believing they treat every word as a landmine.

“Once we give up free speech in this country it is over,” the Smashing Pumpkins singer sighed.

“I am horrified to see young people who are coming from a variety of backgrounds…who feel they have a right…to feel that they’re victims…..”

Corgan, 49, hopes this ends but doesn’t think it will in his lifetime.

Meanwhile, he praised how Republican Presidential candidate Donald Trump has shaken up the system: “One of the most positive aspects of the Trump campaign is that he connected the dots and those people who feel disenfranchised by the system,” he told Jones.

Corgan said even some people in his own family fall into that group who feel, “I paid my taxes, I’ve raised my kids, I’ve worked hard but why am I being asked to carry some additional burden here?…Why am I being guilted?

According to Corgan, the billionaire businessman has struck a chord: “Trump is known to most people because he was on a TV show….there’s not a smarter communicator on the business level that he is….When you watch his speeches, it’s like, it’s all sound bites so he’s understood.”

When Jones asked why the Republican establishment is so scared of Trump, Corgan commented, “He is a true outlier in the dangerous sense of, he won’t play by any particular rule.

“Let’s be real simple here…we all belong to a club, a clique of friends, a team, and here comes the newcomer and they say, we don’t if we want you on our team because you’re going to mess up our dynamic.

Corgan calls the Republican convention this July a “zeitgeist moment” and said he believes in peaceful political dissent there.

But he’s no fan of Twitter (which he quit recently) and other social media like Facebook which he feels is a form of mind control enslaving people.

To Corgan, the press is part of the problem, “The media is presenting things, ‘oh, hey, your vote doesn’t count. Let’s move on.’ That is literally the next installment of the reality show….tune in next to find out whether or not your vote does matter.”

Though not singling anyone out in politics, Corgan decried the “brazen robbing of people’s ability to cast their votes.”