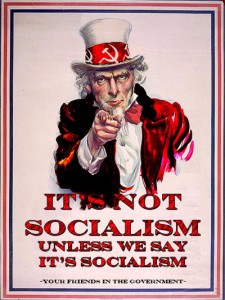 There is a growing divide in the United States, as there is throughout the world, regarding the role of governments in economies.

Following the phenomenal success of “The American Experiment” of the Eighteenth and Nineteenth Centuries, the world saw the rise of socialism in the early part of the Twentieth Century, when the economies of China and Russia were usurped by the mass murder of many millions of their citizens who owned or produced more than the bare minimum.

This “redistribution” of wealth was sold to the common people as “fairness,” and the Red Army was simultaneously forgiven its atrocities as the blood of millions stained the Eastern Hemisphere.

After World War II, less militaristic forms of socialism spread to the west, first in Europe, then to Banana Republics where dictators quickly rose to power on the backs of local revolutionaries they slew once “independence” was gained.

To understand Socialism, we should contrast it with its opposing economic system—Capitalism. Capitalism is a system where individuality reigns supreme, and independent persons utilize whatever resources they can develop, individually or in a voluntary aggregate, to generate the production of goods and services, which are sold to others who need them as an unhampered market requires. This is the system that catapulted America to world leadership in mere decades.

Socialism, on the other hand, is a system where government officials dictate every aspect of economic production and distribution. Government bureaucrats ascertain and determine what products will be produced, which services will be required, and which people will provide them. Socialism decries individualism, citing the accumulation of economic and social power into the hands of a few as a natural result of unbridled performance.

Socialism was proved a flawed system when those nations who had adopted it collapsed under their own weight, or as in the case of China, moved toward capitalism to save their faltering economies. The social impact on the citizens of those countries was much worse than the economic difficulties created by centralized control, however. The concentration of wealth and power under capitalism was eclipsed under socialism, where a mere handful dictated terms of life to the masses and lived like potentates compared with the working class.

Leftists in the U.S. have long eyed the wealth produced by America’s economic engine and have waged a hundred year war to siphon its prosperity off to socialistic programs. Indeed, power has shifted from the individual American to state and federal bureaucracies as individual liberties have been subordinated to government institutions through burdensome taxation and regulation. This loss of individual liberties has been accomplished in the name of “fairness” by the same methods employed in China and the U.S.S.R., only on a slower course. 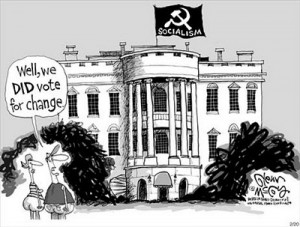 President Barack Hussein Obama outlines in his own autobiographies his affinity with socialism, and his disdain for what he terms colonialists (essentially, America’s founders). He has surrounded himself with socialists and communists his entire life, including during his presidency. His open agenda has been to subordinate and nationalize large portions of the American economy, and his insatiable appetite for spending the money of his fellow Americans, present and future, knows no practical bounds.

Obama, and all of those on the left who fantasize about a socialistic utopia covering our once-great land, should take some lessons in reality from history—recent at that. Lacking the wisdom to do that, they should reconsider the sage words of U.K.’s former Prime Minister:

“The problem with socialism is that you eventually run out of other people’s money.” ― Margaret Thatcher