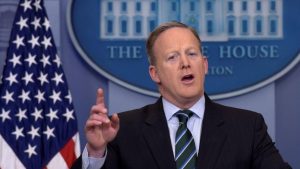 The move came as Trump booster and Wall Street financier Anthony Scaramucci was expected to be tapped for White House communications director.

Speculation about Spicer’s status with the White House has run rampant for months, but one source described the appointment of Scaramucci was the deciding factor.

Spicer originally was supposed to lead a newly restructured communications operation. Under that structure, the communications director would report to him — which may have caused a conflict with Scaramucci, who met with Trump on Friday.

Deputy Press Secretary Sarah Huckabee Sanders in recent weeks has taken the lead on many daily press briefings, which are mostly held off camera and no longer televised live.

News broke overnight on the resignation of Mark Corallo, who had been the lead spokesman on behalf of Trump’s long-time personal attorney Marc Kasowitz and the legal team. Corallo, who was previously a spokesman for the Justice Department, reportedly objected to public criticisms of Special Counsel Robert Mueller. His resignation comes days after Trump told The New York Times that he didn’t want Mueller investigating Trump family business ties outside the Russia scope.

Kasowitz, meanwhile, is stepping back to take a lower-profile role.

Fox News’ John Roberts and The Associated Press contributed to this report.