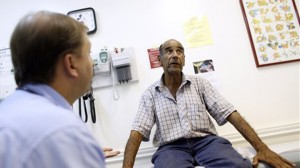 Thousands of people with serious medical problems are in danger of losing coverage under President Obama’s health care overhaul because of cost overruns, state officials say.

At risk is the Pre-Existing Condition Insurance Plan, a transition program that’s become a lifeline for the so-called uninsurables — people with serious medical conditions who can’t get coverage elsewhere. The program helps bridge the gap for those patients until next year, when under the new law insurance companies will be required to accept people regardless of their medical problems.

In a letter this week to Health and Human Services Secretary Kathleen Sebelius, state officials said they were “blindsided” and “very disappointed” by a federal proposal they contend would shift the risk for cost overruns to states in the waning days of the program. About 100,000 people are currently covered.

“We are concerned about what will become of our high risk members’ access to this decent and affordable coverage,” wrote Michael Keough, chairman of the National Association of State Comprehensive Health Insurance Plans. States and local nonprofits administer the program in 27 states, and the federal government runs the remaining plans.

“We fear…catastrophic disruption of coverage for these vulnerable individuals,” added Keough, who runs North Carolina’s program. He warned of “large-scale enrollee terminations at this critical transition time.”

The crisis is surfacing at a politically awkward time for the Obama administration, which is trying to persuade states to embrace a major expansion of Medicaid under the health care law. One of the main arguments proponents of the expansion are making is that Washington is a reliable financial partner.

The root of the problem is that the federal health care law capped spending on the program at $5 billion, and the money is running out because the beneficiaries turned out to be costlier to care for than expected. Advanced heart disease and cancer are common diagnoses for the group.

Obama did not ask for any additional funding for the program in his latest budget, and a Republican bid to keep the program going by tapping other funds in the health care law failed to win support in the House last week.

Brian Cook, a spokesman for the HHS agency overseeing the health care law, took issue with idea that thousands of people could lose coverage, though he did not elaborate.

“These actions are part of our careful management of the program to ensure that there is a seamless transition … for enrollees, and that funding is spent appropriately,” he said in a written statement.

The administration has given the state-based plans until next Wednesday to respond to proposed contract terms for the program’s remaining seven months.

Delivered last Friday, the new contract stipulated that states will be reimbursed “up to a ceiling.

“The `ceiling’ part is the issue for us,” Keough said in an interview. “They are shifting the risk from the federal government, for a program that has experienced huge cost overruns on a per-member basis, to states. And that’s a tall order.”

State officials say one likely consequence of the money crunch will be a cost shift to people in the program, resulting in sudden increases in premiums and copayments. Many might just drop out, said Keough.

If a state and HHS can’t come to an agreement, the federal government will take over that state’s program for the rest of this year. Amie Goldman, director of the Wisconsin program, said that would be an unneeded and possibly risky disruption for patients who’ll have to change insurance next year anyway, when the pre-existing conditions plan formally ends.

Goldman said in her state, for example, the University of Wisconsin hospital isn’t part of the federal government’s provider network. “My colleagues in other states have similar concerns about holes in the network,” she said. “I think it puts people at medical risk.”

At his news conference this week, Obama acknowledged the rollout of his health care law wouldn’t be perfect. There will be “glitches and bumps” he said, and his team is committed to working through them. However, it’s unclear how the pre-existing conditions plan could get more money without the cooperation of Republicans in Congress.

The program got off to a slow start, partly because insurance isn’t cheap. It offers policies at market rates, and that can mean premiums of $500 a month for someone in their 50s. The first inkling of financial problems came in February, when HHS announced a freeze on new applications.

The plan was intended only as a stopgap until the law’s main push to cover the uninsured starts next year. Subsidized private insurance will be available through new state-based markets, as well as an expanded version of Medicaid for low-income people. At the same time, virtually all Americans will be required to carry a policy, or pay a fine.

States are free to accept or reject the Medicaid expansion, and the new problems with the stopgap insurance plan could well have a bearing on their decisions.