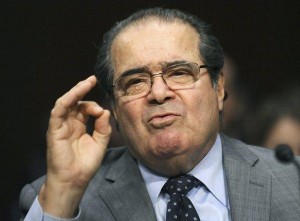 Supreme Court Justice Antonin Scalia, the judicial standard-bearer of the conservative movement and the court’s most provocative member, died Saturday. He was 79.

‎His death means President Obama could have an unprecedented chance to try to shift the balance of the court during his final year in office — setting up a Senate battle in the heat of an election year.

Obama said he planned “to fulfill my constitutional responsibility to nominate a successor in due time.”

The U.S. Marshals Service in Washington confirmed Scalia’s death at a private residence in the Big Bend area of south Texas.

The service’s spokeswoman, Donna Sellers, says Scalia had retired for the evening and was found dead Saturday morning when he did not appear for breakfast.

“He was an extraordinary individual and jurist, admired and treasured by his colleagues,” Chief Justice John Roberts said on behalf of the high court and retired justices. “We extend our deepest condolences to his wife, Maureen, and his family.”

Scalia used his keen intellect and missionary zeal in an unyielding attempt to move the court farther to the right and to get it to embrace his “originalist” view of judging after his 1986 appointment by President Ronald Reagan.

His 2008 opinion for the court in favor of gun rights was his crowning moment in more than 30 years on the bench.

Scalia was a strong advocate for privacy in favoring restrictions on police searches and protections for defendants’ rights.

But he also voted consistently to let states outlaw abortions, to allow a closer relationship between government and religion, to permit executions and to limit lawsuits.

Scalia advocated tirelessly in favor of originalism, the method of constitutional interpretation that looks to the meaning of words and concepts as they were understood by the Founding Fathers.

Democrats and Republicans on Capitol Hill honored Scalia and his contributions to America.

“Justice Scalia did more to advance originalism and judicial restraint than anyone in our time, and it all started with just two words: ‘I dissent,’ ” said House Speaker Paul Ryan, R-Wis. “I knew him. I respected him. I looked up to him. We all did.”

New York Sen. Chuck Schumer, the next likely Democratic Senate leader, tweeted: “While we disagreed on many issues, Justice Scalia was a brilliant man & a great son of Queens w/ a genuine joy for life.”

The Life of Antonin Scalia | Graphiq

“We have lost a great man and a great Supreme Court Justice,” said retired neurosurgeon Ben Carson, a strong conservative. “For the past three decades, his towering intellect and trenchant wit has characterized the deliberations and decisions of the high court.”

Scalia’s impact on the court was muted by his seeming disregard for moderating his views to help build consensus.

His impact on the court was muted by his seeming disregard or moderating his views to help build consensus, though he was held in deep affection by his ideological opposites Ruth Bader Ginsburg and Elena Kagan.

Scalia and Ginsburg shared a love of opera. He persuaded Kagan to join him on hunting trips.

His 2008 opinion for the court in favor of gun rights drew heavily on the history of the Second Amendment and was his crowning moment on the bench.

He could be a strong supporter of privacy in cases involving police searches and defendants’ rights.

Indeed, Scalia often said he should be the “poster child” for the criminal defense bar.

But he also voted consistently to let states outlaw abortions, to allow a closer relationship between government and religion, to permit executions and to limit lawsuits.

He was in the court’s majority in the 2000 Bush v. Gore decision, which effectively decided the presidential election for Republican George W. Bush.

“Get over it,” Scalia would famously say at speaking engagements in the ensuing years whenever the topic arose.

Bush later named one of Scalia’s sons, Eugene, to an administration job, but the Senate refused to confirm him.

Eugene Scalia served as the Labor Department solicitor temporarily in a recess appointment.

A smoker of cigarettes and pipes, Scalia enjoyed baseball, poker, hunting and the piano.

He was an enthusiastic singer at court Christmas parties and other musical gatherings, and once appeared on stage with Ginsburg as a Washington Opera extra.

Ginsburg once said that Scalia was “an absolutely charming man, and he can make even the most sober judge laugh.” She said that she urged her friend to tone down his dissenting opinions “because he’ll be more effective if he is not so polemical. I’m not always successful.”