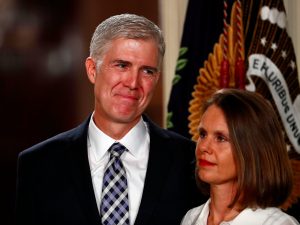 House Democratic leader Nancy Pelosi launched into a blistering attack on President Trump’s Supreme Court pick Tuesday, accusing Judge Neil Gorsuch of being hostile to everything from clean air to children with autism – a hint of likely Democratic resistance, as some Republicans eye a potential “nuclear option.”

Trump nominated Gorsuch to the Supreme Court on Tuesday, choosing an originalist judge seen by supporters to be in the mold of the late Associate Justice Antonin Scalia, whose death in February 2016 opened up the spot Gorsuch is now seeking to fill.

Pelosi made her pointed remarks during a CNN town hall, in which she called Gorsuch “a very hostile appointment” and “well outside the mainstream of American legal thought.”

“If you breathe air, drink water, eat food, take medicine or in any other way interact with the courts, this is a very bad decision,” she said.

“What saddens me the most as a mom and a grandmother, though, is his hostility toward children in school, children with autism,” Pelosi said. “He has ruled that they don’t have the same rights under the [Individuals With Disabilities Education Act] that they could reach their intellectual and social advancement under the law — he has said that doesn’t apply to them.”

Pelosi does not get a say in Gorsuch’s confirmation, which is handled by the Senate, but her scathing remarks are a possible indicator of the hostility Gorsuch is likely to face. Sens. Ron Wyden, D-Ore., and Elizabeth Warren, D-Mass., have already expressed their opposition to the pick.

The potential Democratic opposition to the pick has some Senate Republicans digging in for a tough confirmation fight, including a possible change of Senate rules to lower the threshold for confirmation, with Sen. Ted Cruz, R-Texas, warning that “all procedural options are on the table.”

“The Democrats are not going to succeed in filibustering the Supreme Court nominee,” Cruz told Politico.

On “Fox & Friends” Wednesday, Cruz said that a Gorsuch pick was exactly what the American people wanted.

“This election was in a very real sense a referendum on this seat,” he said. “I think the American people made that decision on Election Day and there’s a mandate coming out of the election.”

Senate Minority Leader Chuck Schumer, D-N.Y., who will be key in deciding if there is an effort to block Gorsuch, said Tuesday that “the burden is on Judge Neil Gorsuch to prove himself to be within the legal mainstream and, in this new era, willing to vigorously defend the Constitution from abuses of the Executive branch and protect the constitutionally enshrined rights of all Americans.” However, he added he has “serious doubts” as to whether Gorsuch can do this, as he called for setting a 60-vote bar for confirmation.

Republicans hold a 52-48 majority in the Senate, meaning if Democrats filibuster, Republicans may struggle to find the eight Democrats needed to get the 60 votes needed to break it.

But this opens Democrats up to accusations of obstructionism, and also could push the Republicans to use the “nuclear option” to change the rules to blunt the filibuster – something then-Senate Majority Leader Harry Reid, D-Nev., did for lower court nominees in 2013.

Senate Majority Leader Mitch McConnell, R-Ky., did not say whether he’d use the “nuclear option” in an interview with Fox News, but said: “We’re going to get the judge confirmed.”

While Republicans did not block President Barack Obama’s nominations of Justices Kagan and Sotomayor, they did refuse to hold hearings for Judge Merrick Garland, whom Obama picked to fill the Scalia seat in 2016. They argued that a Supreme Court pick should not be made in an election year.

This has, in turn, led some Democrats to call for outright obstructionism to Gorsuch in response.

The New York Times editorial board also cited the Garland controversy in its opinion piece, calling Gorsuch “the nominee for a stolen seat.”

Other Democrats have urged caution, with Sen. Joe Manchin, D-W.Va., noting that “we have a responsibility to do our jobs as elected officials.”

“Just as I have all along, I urge my colleagues to put partisan politics aside and allow the vetting process to proceed,” he said in a statement.