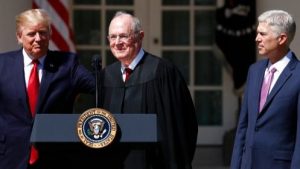 The Supreme Court’s term ends next week with growing speculation that Justice Anthony Kennedy–the panel’s most pivotal member–may retire at age 80 after 29 years on the court.

Action is expected on President Trump’s travel ban before the court’s long summer break but the biggest news of all would be if Kennedy were to use the court’s last public session on Monday to announce his retirement, the Associated Press reported Saturday.

Kennedy has played an important role as the court’s swing vote on many important rulings. His departure would allow conservatives to wrest near total control of the bench for the foreseeable future.

The justice has sided with his liberal colleagues on gay rights and abortion rights, as well as some cases involving race, the death penalty and the rights of people detained without charges at the Guantanamo Bay naval base. He has written all the court’s major gay-rights decisions, including the 2015 ruling that declared same-sex marriage is a constitutional right nationwide

Several of his former law clerks have said they think he is contemplating stepping down in the next year or so.

Kennedy and his clerks were gathering over the weekend for a reunion that was pushed up a year and helped spark talk he might be leaving the court.

Sen. Chuck Grassley of Iowa, chairman of the Senate Judiciary Committee, told reporters in April, “I would expect a resignation this summer.”

Kennedy’s departure would allow Trump to fill a second Supreme Court vacancy in just a short period of time.

The vote came after Senate Republicans voted to change parliamentary rules to require only 51 votes to confirm Supreme Court nominees.

Neither appear to be ready to step down with Trump in the White House—if they can help it.