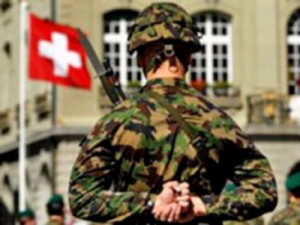 In a revealing move the Swiss Defense Ministry is beefing up its military presence to defend Swiss borders against a massive influx of refugees from Greece, Spain, France, Italy, Portugal and other European Union countries on the brink of collapse.

As a result of 1) skyrocketing national debts and 2) a silent invasion by Muslims from the Middle East, EU nations are facing escalating threats of violence and civil unrest from those within their borders.

Many of Europe’s top earners have already moved their savings and wealth out of national banks and into safer Swiss banks to protect them from local financial collapse or confiscation by socialist governments taking over the various members of the EU. Swiss security experts concede that Switzerland is generally considered a safe haven from the looming social collapse and resulting chaos of its neighbors, and say that the recent moves of the Defense Ministry reflect its growing unease with conditions in the failing countries.

Switzerland is not a member of the EU, and promotes a hard-working, capitalist society. As a result, the Swiss enjoy unemployment rates below 3%. Switzerland also requires that every able-bodied male of military age be armed and trained, meaning it has one of the largest armies in the world relative to the size of its population. It can quickly mobilize hundreds of thousands of troops if the need arises.

At a time when the American president is doing his best to transform the US into a EU-like nation, voters would do well to scrutinize that model more closely before casting the deciding vote.