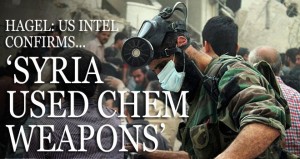 Defense Secretary Chuck Hagel said Thursday the U.S. intelligence community believes the Syrian regime used the chemical weapon sarin, a revelation that immediately raised the question of whether a “red line” had been crossed in the country’s civil war.Hagel confirmed the intelligence assessment, which was detailed in a letter to select members of Congress, while speaking to reporters on a visit to Abu Dhabi. The administration swiftly released those letters, which said U.S. intelligence determined with varying degrees of confidence that “the Syrian regime has used chemical weapons on a small scale in Syria, specifically the chemical agent sarin.”

The White House stressed that this was not enough to confirm how the nerve gas was released — though acknowledged it is “very likely” to have originated with the regime of Bashar Assad — and pressed the United Nations for a “comprehensive” investigation. The letter from the White House director of the Office of Legislative Affairs to leading members of the Senate Armed Services Committee said the assessment was based in part on “physiological samples.”

Secretary of State John Kerry further confirmed that there were two documented instances of chemical weapons use.

The assessment is likely to prompt calls for more serious consideration of intervention. President Obama has said the use of chemical weapons would be a “game-changer” in the U.S. position on intervening in the two-year-old Syrian civil war. Obama said last August that “a red line for us” would be the movement or use of chemical weapons, adding “that would change my calculus.”

“Precisely because the president takes this issue so seriously, we have an obligation to fully investigate any and all evidence of chemical weapons use within Syria,” she said in a statement. “That is why we are currently pressing for a comprehensive United Nations investigation that can credibly evaluate the evidence and establish what took place. We are also working with our friends and allies, and the Syrian opposition, to procure, share and evaluate additional information associated with reports of the use of chemical weapons so that we can establish the facts.”

Asked if this crossed a “red line” for the U.S., Hagel likewise said they are still trying to assess.

“It violates every convention of warfare,” he said.

Published April 25, 2013 / FoxNews.com /The Associated Press contributed to this report.