Notice: Function add_theme_support( 'html5' ) was called incorrectly. You need to pass an array of types. Please see Debugging in WordPress for more information. (This message was added in version 3.6.1.) in /home/kj8d9sfz7jzn/public_html/federalistpress.com/wp-includes/functions.php on line 5831
 Tea Party Groups Prepare to Sue IRS 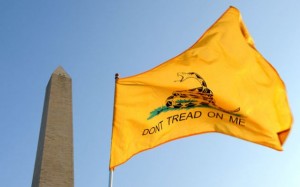 WASHINGTON –  Jay Devereaux hadn’t paid much attention to the daily drumbeat of partisan politics in D.C. He wasn’t a Washington nerd, and didn’t know who said what during congressional hearings — nor did he care.

But when news broke that the government was using taxpayer money to bail out Wall Street banks, he started paying attention and didn’t like what he was hearing.

So the Florida father and information technology specialist decided to form a group, Unite in Action, to educate people in his area about the issues, he said. It was originally formed as a corporation before Devereaux decided to apply for tax-exempt status from the IRS.

That was two years ago. It was never approved.

“It’s all but killed us,” Devereaux told FoxNews.com. “We could lose everything. Today, it’s me and my organization, but tomorrow it could be you.”

Devereaux is among a group of activists, being represented by the American Center for Law and Justice, who are preparing to sue the federal government for the practice of targeting Tea Party groups. ACLJ Executive Director Jordan Sekulow told FoxNews.com he’ll likely file the civil suits next Wednesday or Thursday on behalf of more than a dozen Tea Party groups who say they were singled out by the IRS and had their tax-exempt status severely delayed or denied altogether.

The suits, combined with congressional inquiries and an FBI probe, signal that the heated hearing on Capitol Hill Friday – with the outgoing IRS chief – was just the start of a protracted legal and political battle over the scandal.

Sekulow said the number of plaintiffs in the civil suit are growing as is the list of who his organization wants held accountable. It’s still unclear whether the organization will file as a class-action or individually in the 17 different states where the complaints originate.

Litigation could take months or years and for some like Devereaux, time isn’t on their side.

While initially waiting for IRS approval, Devereaux dipped into his own bank account, maxed out credit cards and even borrowed money from friends so his group could put on a civic-engagement training session at the Omni Shoreham hotel in Washington. His goal was to eventually set up a steady stream of revenue for a tax-exempt nonprofit.

The next time Devereaux heard from the IRS, they had requested details and credentials on every single speaker and all the educational materials provided in the 78 classes held at the hotel. The IRS also wanted information on all 45 vendors, their credentials and a donor list.

Five rounds of IRS letters later, and United in Action’s tax-exempt status is still in limbo.

If they are denied, Devereaux’s group would owe the federal government “somewhere in the neighborhood of $70,000 in back taxes,” he said, referring to money he would owe the government on donations.

“It’s more than we have in our bank account,” he said.

Waco Tea Party President Toby Walker said her group applied for a 501(c)(4) status in July 2010. She’d call the IRS from time to time to check on the progress but was basically told, ‘Don’t call us, we’ll call you,’ she said.

Walker said she was asked questions that went well beyond the purview of the agency’s authority. They wanted to know everything about the Waco Tea Party group, their relationships with public officials, lists of volunteers and every single news story the group had ever been mentioned in.

Walker said the request was so lengthy and intrusive that had she complied with the demands, she “would have needed a U-haul truck of about 20 feet.”

While Walker’s group was finally granted tax-exempt status in March 2013, she said a lot of damage has already been done. She said people were afraid to support her group financially because they had not received the IRS-stamped status.

Others were afraid that they might be targeted by the IRS if they supported Walker’s group publicly. Having one of the most powerful government agencies angry at them wasn’t a risk many people were willing to take. And so the group suffered, she said.

“We spent thousands of our own dollars fighting this,” she said. “If this happens to one organization in America, we should all be outraged.”

Allegations that the IRS had been targeting conservative groups that applied for tax-exempt status date back years but a government report released Wednesday backed up the claims. The White House has spent most of the week trying to contain the fallout from the scandal. “Americans are right to be angry about it, and I am angry about it,” President Obama said earlier this week.

By Friday, two of the agency’s top tax officials had been removed from their posts. One, outgoing acting IRS commissioner Steven Miller, was grilled Friday morning in the House Ways and Means Committee by Republican and Democratic lawmakers who demanded answers on why the unfair practice of targeting conservative groups was allowed to continue on his watch.