Notice: Function add_theme_support( 'html5' ) was called incorrectly. You need to pass an array of types. Please see Debugging in WordPress for more information. (This message was added in version 3.6.1.) in /home/kj8d9sfz7jzn/public_html/federalistpress.com/wp-includes/functions.php on line 5831
 Ted Cruz to Announce Fiorina as VP Running Mate 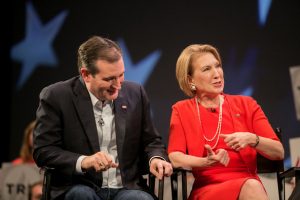 Ted Cruz told reporters Wednesday that he’ll be making a “major announcement” during a 4 p.m. ET rally in Indianapolis, where he’s expected to announce that ex-presidential hopeful and former Hewlett-Packard CEO Carly Fiorina will be his running mate should he win the GOP nomination.

The New Hampshire television station WMUR reported that Cruz intended to announce Fiorina as his running mate. Politico subsequently reported that Cruz would make the announcement in an attempt to add a new jolt to a staggering campaign.

Fiorina was spotted in Indianapolis ahead of the announcement.

Fiorina endorsed Cruz not long after dropping out of the GOP race, and she has frequently appeared as a surrogate for the senator since.

Cruz is fresh off of a massive defeat during Tuesday’s East-Coast primaries. He dropped all five contests by large margins to GOP frontrunner Donald Trump, who has now defeated Cruz and Ohio Gov. John Kasich in six straight contests.

The Texas senator is mathematically eliminated from reaching the 1,237 delegates needed to secure the GOP nomination ahead of the July convention. But he is hoping to stop Trump from reaching that number so that the convention can be opened up to a second ballot of voting.

In hopes of doing so, Cruz recently struck an agreement with Kasich that called for the Ohio governor to pull resources out of Indiana, clearing the way for Cruz to have a more favorable matchup with Trump.

For his part, Trump addressed the Fiorina speculation during a round of television appearances Wednesday. He brushed it off during a “Good Morning America” interview, saying Fiorina “did not resonate” when she was a candidate.