Notice: Function add_theme_support( 'html5' ) was called incorrectly. You need to pass an array of types. Please see Debugging in WordPress for more information. (This message was added in version 3.6.1.) in /home/kj8d9sfz7jzn/public_html/federalistpress.com/wp-includes/functions.php on line 5831
 Terror Suspected: Explosion, Panic and Death at Ariana Grande Concert in England 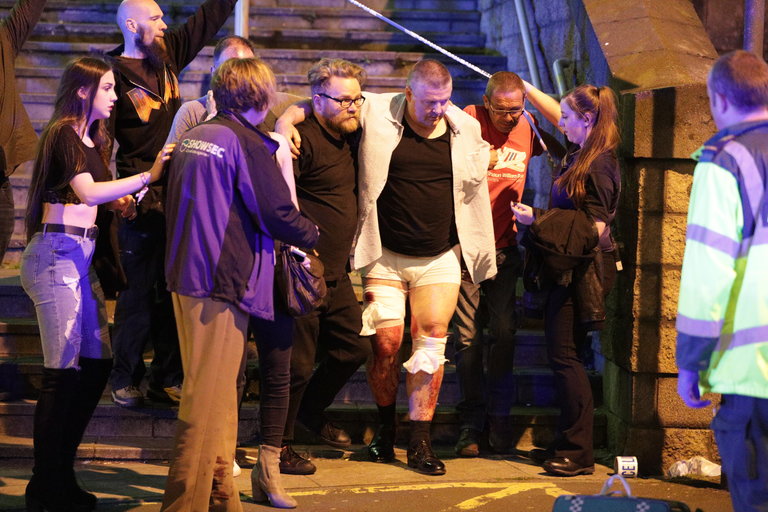 MANCHESTER, England — At least one explosion, which may have been a suicide bombing, thundered through a Manchester concert arena on Monday night just as a performance by the pop star Ariana Grande ended, in what the police described as a “terrorist incident.” They said at least 19 people had been killed and 50 wounded as panicked spectators, including adolescents, screamed and fled.

There was no immediate word from the police on the precise cause of the blast, but it evoked the terrorist attacks in Paris in November 2015, which included a deadly assault inside a concert arena where the Eagles of Death Metal had been playing.

“This is currently being treated as a terrorist incident until the police know otherwise,” the Manchester police said in a Twitter post.

People at the concert at the Manchester Arena said they had heard what sounded like explosions at the end of the show, around 10:30 p.m.

There were unconfirmed reports that a suicide bomber had detonated a nail-filled explosive device.

At least one explosion happened in the foyer of the arena, not the main event hall, according to the British Transport Police, the force that protects Victoria Station, the train terminus next to the arena. The terminal was evacuated.

Early Tuesday morning, Sky News reported that a bomb disposal team had arrived on the scene as part of a police investigation and that the security cordon around the arena had been widened.

One concertgoer, Sasina Akhtar, told The Manchester Evening News that there had been an explosion at the back of the arena after the last song. “We saw young girls with blood on them,” she said. “Everyone was screaming, and people were running.”

Ms. Grande, 23, a singer with a big voice who started her career as a star on a Nickelodeon TV series, is on an international tour supporting her 2016 album, “Dangerous Woman.” Two additional acts, Victoria Monét and Bia, performed as openers on Monday. The tour was scheduled to continue on Thursday at the O2 Arena in London.

“Ariana is O.K.,” said her publicist, Joseph Carozza. “We are further investigating what happened.”

Parents separated from their children during the mayhem were told to go to a Holiday Inn, where many children had taken refuge. Local residents offered stranded concertgoers places to stay in their homes.

Gary Walker, who was at the show with his wife and two daughters, said he “heard a massive bang and saw a flash” just as the concert finished. He turned and realized that his wife had been hurt. Mr. Walker, who is from the northern city of Leeds, said she had a stomach wound and possibly a broken leg. He said he lay down with her and saw “metal nuts on the floor.”

Ms. Walker was taken to a hospital, and Mr. Walker was standing with his daughters at Deansgate, the main shopping street in Manchester.

The confusion and fear in the hours afterward was reflected on social media. One Twitter post asked: “Did anybody see my girlfriend? I lost her in the chaos.”

The BBC interviewed one witness who was waiting outside the arena to pick up his wife and daughter. He recounted that the “whole building shook,” that there was “carnage everywhere,” and that the explosion appeared to come from near the stadium’s ticket area.

Videos posted on Twitter showed concertgoers running and screaming. Hannah Dane, who attended the performance, told The Guardian that she had heard “quite a loud explosion.”

She added, “It shook, then everyone screamed and tried to get out.”

The Greater Manchester Police said in a statement, “There are a number of confirmed fatalities and others injured.”

The Manchester Arena, opened in 1995, can hold up to 21,000 spectators; it was not clear how many people were in the crowd for the concert.

Karen Ford, a witness, told the BBC that she had been leaving the concert when the blast happened. “Everyone was just getting out of their seats and walking toward the stairs when all of a sudden a huge sound, which sounded like an explosion, went off,” she said.

She said there was no smoke, just one very loud bang. “It was very, very loud,” she said, adding that her husband thought he had heard a second explosion. “There were shoes on the floor,” left behind by people who had fled, she recalled.

“Just chaos,” she said. “I was trying to tell people to calm down.” She added that the crush of people trying to flee created a perilous situation: “We were being crushed.”

Outside, Ms. Ford said, parents awaited children who had attended the concert, checking their smartphones in a panic. “Everyone was trying to find each other,” she said.

By RORY SMITH and SEWELL CHAN