Notice: Function add_theme_support( 'html5' ) was called incorrectly. You need to pass an array of types. Please see Debugging in WordPress for more information. (This message was added in version 3.6.1.) in /home/kj8d9sfz7jzn/public_html/federalistpress.com/wp-includes/functions.php on line 5831
 Terrorism at Boston Marathon 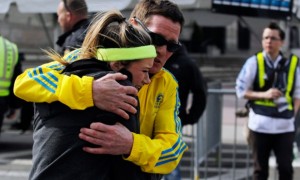 The deadly bombing at the Boston Marathon that killed at least three and injured at least 144 is believed to be an act of terrorism, senior White House officials told Fox News.Two explosions tore through the finish line of the world-famous race just before 3 p.m., going off simultaneously as throngs of onlookers watched runners complete the 26.2-mile trek. The timing of the blasts immediately sparked suspicions of a deliberate act.

“When multiple devices go off, that’s an act of terrorism,” a senior administration official told Fox News, just moments after President Obama delivered a statement to the nation and did not use the word ‘terror.’

Authorities searched an apartment in the nearby Boston suburb of Revere as part of the investigation into the explosions. FoxNews.com saw federal, state and local law enforcement entering the building late Monday night and early Tuesday morning.

Sources confirmed to FoxNews.com that the apartment being searched in connection to the bombings is on the fifth floor of the building.

A source close to the investigation confirms to FoxNews.com the man whose apartment was searched is considered a person of interest in the case, and is the same person of interest Fox News confirmed earlier authorities are guarding at a local hospital.

The source stressed that the person of interest is not a suspect, and said he suffered serious injuries in the explosion.

The Pakistani Taliban, which has threatened attacks in the United States because of its support for the Pakistani government, denied any role in the marathon bombings Tuesday.

The group’s spokesman, Ahsanullah Ahsan, denied involvement in a telephone call with The Associated Press. He spoke from an undisclosed location.

Federal investigators said Monday no one had claimed responsibility for the devastating attack on one of the city’s most famous civic holidays, Patriots’ Day.

“There is no suspect,” Boston Police Commissioner Edward Davis said Monday amid reports of the person of interest. “There are people we’re talking to.”

A first responder source confirms to Fox News that five total explosive devices were found in the Boston area, including the two that exploded. Authorities spent the next several hours sweeping the area for additional devices.

Davis said at an evening press conference the bombing killed “at least three,” and multiple reports said one of the dead was an 8-year-old boy. A source tells the Associated Press the boy’s mother and sister were also injured as they waited for his father to finish the race.

A first responder source tells Fox News all of the victims were either bystanders or marathon runners, and that two of the deceased were adults.

In addition to the deaths, more than 144 people were injured – including up to 10 with amputated limbs and 17 critically.

At Massachusetts General Hospital, Alasdair Conn, chief of emergency services, said: “This is something I’ve never seen in my 25 years here … this amount of carnage in the civilian population. This is what we expect from war.”

Boston Police Commissioner Edward Davis said during a press conference that no suspect is in custody.

The first two explosions occurred at 2:50 p.m. – nearly five hours after the marathon began – about 50 to 100 yards apart, according to Davis. A third explosion occurred near the John F. Kennedy Presidential Library and Museum in the Columbia Point section of Dorchester, several miles southeast of the marathon’s finish line, at around 4:15 p.m. Police could not say if it was related to the earlier explosions.

The horror unfolded as the city marked the 238th annual Patriots’ Day, commemorating the anniversary of the Battles of Lexington and Concord at the beginning of the Revolutionary War. Competitors and race organizers were crying as they fled the bloody chaos, while some witnesses reported seeing victims with lost limbs.

“Somebody’s leg flew by my head,” a spectator, who gave his name as John Ross, told the Boston Herald. “I gave my belt to stop the blood.”

Twenty-six people were transported to Brigham and Women’s Hospital, including a 3-year-old, who was then taken to a children’s hospital. A doctor at the hospital said at least two of the patients there are in critical condition and that some have burns and injuries that will likely require amputations.

“They just started bringing people in with no limbs,” said runner Tim Davey of Richmond, Va. He said he and his wife, Lisa, tried to shield their children’s eyes from the gruesome scene inside a medical tent that had been set up to care for fatigued runners, but “they saw a lot.”

“They just kept filling up with more and more casualties,” Lisa Davey said. “Most everybody was conscious. They were very dazed.”

Witnesses heard booms that sounded like two claps of thunder near the finish line inside the Fairmount Copley Plaza Hotel, according to multiple local reports. Video of the scene showed a number of emergency crews in the area tending to victims and blood on the ground near the finish line.

“I saw two explosions. The first one was beyond the finish line. I heard a loud bang and I saw smoke rising,” Boston Herald reporter Chris Cassidy, who was running in the marathon, told the newspaper. “I kept running and I heard behind me a loud bang. It looked like it was in a trash can or something…There are people who have been hit with debris, people with bloody foreheads.”

“There are a lot of people down,” said one man, whose bib No. 17528 identified him as Frank Deruyter of North Carolina. He was not injured, but marathon workers were carrying one woman, who did not appear to be a runner, to the medical area as blood gushed from her leg. A Boston police officer was wheeled from the course with a leg injury that was bleeding.

About three hours after the winners crossed the line, there was a loud explosion on the north side of Boylston Street, just before the photo bridge that marks the finish line. Another thunderous explosion could be heard a few seconds later.

“There are people who are really, really bloody,” McLean said. “They were pulling them into the medical tent.”

Cherie Falgoust was waiting for her husband, who was running the race.  “I was expecting my husband any minute,” she said. “I don’t know what this building is … it just blew. Just a big bomb, a loud boom, and then glass everywhere. Something hit my head. I don’t know what it was. I just ducked.”

While the White House does in fact believe terrorism was at play, lawmakers were increasingly reaching the same conclusion.

Sen. Dianne Feinstein, D-Calif., chairwoman of the Senate Intelligence Committee, reportedly said her understanding it “that it’s a terrorist incident.”

Sen. Saxby Chambliss, R-Ga., top Republican on that committee, also said that “as the evidence mounts that this was a terrorist attack, our intelligence and law enforcement agencies must do whatever is necessary to find and interrogate those responsible so we can prevent similar attacks.”

Authorities in New York, meanwhile, are deploying counter-terrorism vehicles around landmark sites in Manhattan, including prominent hotels, according to the New York City Police Department.
Nearly 25,000 people, including runners from around the world, competed in Boston’s celebrated 26.2-mile race, attracting huge throngs of onlookers, especially near the finish line.

“This is a horrific day in Boston,” Massachusetts Gov. Deval Patrick said in a statement. “My thoughts and prayers are with those who have been injured. I have been in touch with the President, Mayor [Thomas] Menino and our public safety leaders. Our focus is on making sure that the area around Copley Square is safe and secured. I am asking everyone to stay away from Copley Square and let the first responders do their jobs.”

Anyone with information on the bombings is being urged to call Boston authorities at 1-800-494-TIPS.