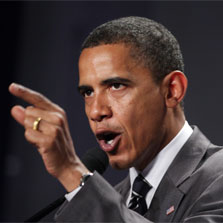 Community Organizer Barack Hussein Obama released his first book about himself in 1995, titled Dreams from My Father, as publicity to launch his Senatorial campaign. The book has only recently received any scrutiny, and reveals a very disturbing ideology and series of life choices in the form of socialist associations and heavy drug use of the would-be leader.

Obama’s second book about himself, The Audacity of Hope: Thoughts on Reclaiming the American Dream, was then written and released by Senator Barack Hussein Obama, as publicity to launch his presidential campaign. The reader quickly learns that Obama’s version of the American Dream is much different than that of the average American.

The promises made to the American people in Obama’s campaigns turn out to bear no resemblance to his actions in office: There would be no rise in taxes for anyone under $250,000 per year, Obamacare would not raise the cost of health care and those who preferred their own plan would not lose it. Also, Gitmo would be closed down and the wars in the middle east would be turned off like a spigot. Or here’s a good one . . . his administration would be the most transparent of any, and the partisan rhetoric would end. How about this one—Obama would cut the federal deficit in half!? In fact, of all of the promises made by candidate Obama, Pulitzer Prize winning Politifact.com of the Tampa Bay Times demonstrates that he has reneged on two-thirds.

No doubt, many of the broken campaign promises were leftist pipe-dreams and would be devastating to the country, and with thankful hearts we recognize that President Obama got a taste of reality on several fronts once he took office, and began to see the world from a more realistic viewpoint, carrying on many of the policies of the Bush administration, notwithstanding the venomous denunciation of those policies by Obama and the left beforehand.

The fact remains, however, that Obama is an ideologue, and his political thinking is much different than that of most American’s, and completely the opposite of the founders of our nation.

Notwithstanding his adoption of some less radical paths once in office, Obama has still been guilty of ignoring the will of the American people on several issues, and has comported himself more like a ruler in many regards, than a public servant—as he was elected to be.

Something the president fails to understand is that the American people do not want him to rule over them like a dictator. Ruling by executive order, as Obama has done on several occasions, most recently in the case of granting amnesty to illegal aliens, circumvents the constitution, making Obama an official enemy of the Constitution, and of the people it protects. During the Obamacare debate in congress the republicans attempted to discuss the unconstitutional portions of the act, inclusions not supported by a clear majority of Americans. While Speaker of the House Nancy Pelosi in classic Orwellian-speak passed off debate with the left’s curt, “We have to pass the bill so you can find out what is in it,” Obama’s response was more draconian in tone: “We won, you lost,” so just sit down and shut the hell up.

The administration has refused to accept responsibility for its many failures and shortcomings, and has stonewalled congressional attempts to get at the heart of corruption and unlawful activities in Eric Holder’s Department of Justice as well as other agencies under the administration.

It is the president’s arrogance over the past three and a half years that has alienated those supporters who bought into his “civil tone” and hope and change campaign promises. His loss of personal likeability and following Mitt Romney in the polls at this point in the election does not bode well for his re-election bid.

If the president has any Hope to remain in office for another four years, he absolutely must Change his attitude. The American people got rid of King George, and if pushed too far, they’ll do likewise with any other person who sets himself up as a dictator.