Notice: Function add_theme_support( 'html5' ) was called incorrectly. You need to pass an array of types. Please see Debugging in WordPress for more information. (This message was added in version 3.6.1.) in /home/kj8d9sfz7jzn/public_html/federalistpress.com/wp-includes/functions.php on line 5831
 The Ethanol Boondoggle 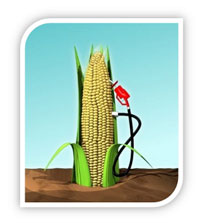 With so many drivers looking to stretch their gas dollars many have discovered that avoiding fuel laced with ethanol can be cost effective. Ethanol, an alcohol derived from corn, is causing additional wear and tear on cars according to many owners, and is less efficient than pure gasoline.

Yet, ethanol producers are petitioning the EPA to augment their market share by increasing the percentage of ethanol in gasoline from 10 percent to 15 percent, a 50 percent increase. They cite the greenness of their product and how it decreases reliance on foreign oil imports as their rationale.

In fact, ethanol has been a liberal pipe dream from the beginning. The government enforced incorporation of ethanol into American gasoline supplies has diverted corn crops around the world, driving food prices up by more than 25 percent, and world starvation levels up by a like number.

But it is green, and efficient liberals tell us. Not so fast. Recent studies have blown the cover off yet another green scam. Studies show that every gallon of ethanol requires 1,500 gallons of water and nearly 2 gallons of gasoline to produce. The cost is prohibitive, but as with all green shams, consumer pricing seems somewhat reasonable due only to government (taxpayer) subsidies.

It is time for the government to get out of the way of energy producers. It has been nearly 40 years since the feds have allowed the oil industry to build a new refinery in the U.S., and they have tied up all of the leases on federal lands so that those sources have dried up. Offshore drilling and over-regulation have led to shortages and catastrophic spills. As we’ve heard so much lately, it’s time to Drill Baby, Drill.