Notice: Function add_theme_support( 'html5' ) was called incorrectly. You need to pass an array of types. Please see Debugging in WordPress for more information. (This message was added in version 3.6.1.) in /home/kj8d9sfz7jzn/public_html/federalistpress.com/wp-includes/functions.php on line 5831
 The Smug Bigotry of Trump-Haters 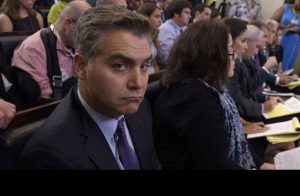 They told me if I vote for Donald Trump we would be overwhelmed with bigotry the likes of which we have never seen before.

And, boy, were they right. Little did we know, however, those obsessed in their opposition to Mr. Trump were actually speaking about themselves.

Last week was a banner one for anti-Trump bigotry. During a briefing at the White House detailing President Trump’s new immigration plan giving priority to those who, among other things, speak English, Jim Acosta, CNN’s White House correspondent, responded, “This whole notion of they have to learn English before they get to the United States, are we just going to bring in people from Great Britain and Australia?”

Mr. Acosta was widely panned for the ignorance of the remark, but it’s also an example of Michael Gerson’s phrase, “the soft bigotry of low expectations.” Coined when he was President George W. Bush’s speechwriter, it perfectly describes the smug attitude of the elite expecting the downtrodden to automatically fail, and their perpetual need for government to save them from themselves.

This cosmopolitan deceit proclaims The Other as infant, perpetually unable to help themselves.

Stephen Miller, the president’s aide, immediately confronted Mr. Acosta’s casual contempt. “This is an amazing moment,” he said, “that you think only people from Great Britain or Australia would speak English is so insulting to millions of hardworking immigrants who do speak English from all over the world.”

Exactly, but it was even more than that. Not only was he wrong on the fact of the matter (54 sovereign states have English as their official language), the soft bigotry comes in the form of expecting non-Western individuals to not be able to cope, adjust or deliver when a requirement is made of them. This cosmopolitan deceit proclaims The Other as infant, perpetually unable to help themselves.

Mr. Acosta is not alone when it comes to thinly-veiled contempt of those unlike society’s all-knowing benefactors. Stuart Rothenberg, a Trump hater and pollster with “Inside Elections,” which bills itself as a provider of “nonpartisan analysis,” tweeted this during President Trump’s rally in West Virginia: “Lots of people in West Virginia can’t support themselves or speak English.”

When confronted on Twitter about the true nature of the good, hardworking West Virginians, he agreed but then insisted they are also “close-minded, provincial, angry & easily misled.”

Soft bigotry isn’t the purview of liberals alone. Ironically, it appears to be an affliction of many, including those in the Republican establishment, who are the most fervent at warning people about Mr. Trump’s supposed evil, bigoted bias.

“The truth about these dysfunctional, downscale communities is that they deserve to die. Economically, they are negative assets. Morally, they are indefensible. Forget all your cheap theatrical Bruce Springsteen crap. Forget your sanctimony about struggling Rust Belt factory towns… The white American underclass is in thrall to a vicious, selfish culture whose main products are misery and used heroin needles. Donald Trump’s speeches make them feel good. So does OxyContin.”

For millions of people in this country, it’s the overbearing and incompetent government bureaucracy that steals the future from people, sucking every ounce of hope from their lives. Mr. Williamson’s disturbing sanctimony did do one thing—exposed how disconnected even the ‘conservative’ establishment had become from the heart of this nation, and explains in part why we have President Trump and not President Jeb.

It’s no wonder we don’t want the so-called “elites” controlling our health care, managing foreign policy or determining who gets in this country and why. Americans are now partisans for the country, their own families and the future, and a vote for Trump in 2016 is the result of that commitment.

In the meantime, Trump-haters on both sides of the aisle will keep pointing at the president and his team as the problem. They are wrong and will continue to fail, reminding us every day the importance of having a President Trump.